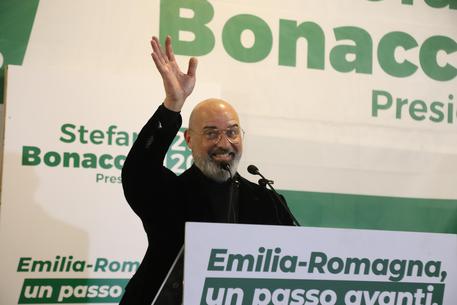 (ANSA) - Rome, January 27 - The ruling centre-left Democratic Party (PD) held Emilia-Romagna in regional elections Sunday dealing an upset to rightwing strongman Matteo Salvini and providing some relief for the PD-Five Star (M5S) government in Rome.
Salvini's whose nationalist league party had become the top party in the leftwing fief in last year's European elections, had vowed to "evict" Premier Giuseppe Conte's government in the event of a win in Emilia-Romagna.
In the event, the PD's incumbent Governor Stefano Bonaccini got 51.6% of the vote to the 43.7% of his League challenger Lucia Borgonzoni.
The M5S candidate, Simone Benini, saw his vote collapse to 3.5% compared to the 33% score for the anti-establishment group in national elections two years ago.
PD leader Nicola Zingaretti hailed the result after the PD became top party again, saying Italy was returning to a "bipolar" left-right system after years of tripolar politics with the M5S somewhere along the spectrum.
"Salvini has lost and the government is stronger," he said.
"This stronger government should now relaunch its action," he said, referring to an upcoming state of government 'verification' aimed at drawing up a new agenda.
Salvini was not too crestfallen despite a failure after months of massive campaigning in the central-northern region.
"For the first time in 70 years there was a game," he said.
The vote compounded the travails of the M5S, whose leader, Foreign Minister Luigi Di Maio, resigned amid defections, backstabbing and a string of poor results last well leaving caretaker Vito Crimi in his stead.
Commentators said the PD, so far the junior partner in the alliance, was mow likely to put its foot down on policies that have split the alliance, such as a reform of the statute of limitations.
Crimi tried to show optimism.
"We won't give in, we are united," he said. "Let the government go ahead, we'll work flat out".
Observers said much of the credit for the PD victory should go the new grassroots leftwing 'Sardines' movement, which sprang and packed squares in Emilia-Romagna in November in opposition to Salvini's nationalist populist policies, and challenged him directly in the regional elections. Meanwhile in Sunday's other regional elections, the centre-right's Jole Santelli triumphed by 51% to 31% over the PD's Filippo Calippo.
Here, too, the M5S vote collapsed and its candidate, Francesco Aiello, got just 7.2%.
After the threat to the national government eased, the spread between Italian and German 10-year bond yields, a sign of market confidence in Italy, dropped to below 140 points from 156 last Friday.