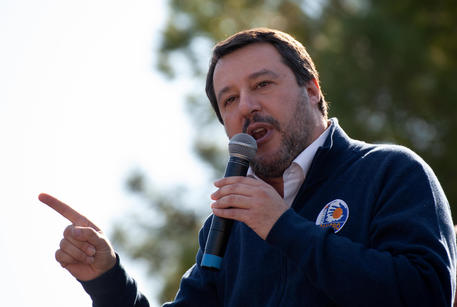 (ANSA) - Rome, January 20 - League leader Matteo Salvini said Monday that he was ready to go to prison to defend his position ahead of a vote by the Senate's parliamentary immunity panel regarding a potential criminal case involving him and migrants he allegedly 'kidnapped'.
"(Giovannino) Guareschi said that there are times when you have to pass through prison to reach freedom," Salvini said at a rally in Comacchio when asked about the case. "We are ready. I am ready". The panel is set to rule on whether to grant prosecutors permission to proceed against Salvini over his conduct when he was interior minister regarding the Gregoretti Coast Guard ship.
The Catania court of ministers has requested parliament give it the OK to proceed against Salvini for allegedly abusing his power by failing to give the ok for more than 100 rescued migrants to disembark from the ship for several days during a long standoff in July.
Salvini, who operated a closed ports policy while interior minister in the last government, faced prosecution before but his parliamentary immunity was never lifted so he could go to trial in previous similar cases. ANSA sources said the parties supporting the government were likely not to take part in Monday's vote on the panel.
The ruling majority accused Senate Speaker Elisabetta Casellati of not being impartial last week after she voted with the opposition regarding a procedural question. She rejected the charge, saying her actions were dictated by the need to keep work in the Upper House moving.