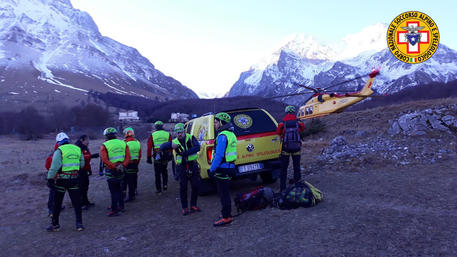 (ANSA) - Rome, December 27 - Three climbers died on Boxing Day on the Gran Sasso, the biggest mountain in the Apennines.
Two men died in one incident, after another one had died in another one.
On Christmas Eve a German snowboarder died in Alto Adige.
The two men who died trying to climb the Gran Sasso's eastern side were named as Ryszard Barone, 25, and Andrea Antonucci, 28, both from Corfinio near L'Aquila in Abruzzo.
They fell about a thousand metres after slipping on the ice and snow.
The other victim on the Gran Sasso was a woman, who has not been named.
The woman, who would have turned 49 on January 7, was from Roseto near Teramo in Abruzzo.
She was hit by an avalanche at about 2,500 metres up.
Meanwhile two climbers had a big scare on Monte Vettore near Ascoli Piceno.
They, too, were hit by an avalanche, but survived. Experts have warned of an avalanche risk in Italian mountains.