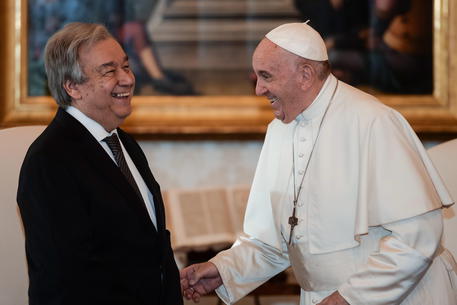 (ANSA) - Vatican City, December 20 - Pope Francis on Friday pledged to do everything possible to stop the sexual abuse of minors in a video message recorded after a audience in the Vatican with United Nations Secretary-General Antonio Guterres. The message also touched on many other issues, included the climate crisis, hunger and inequality. "We cannot, we must not look the other way in the face of injustice, inequality, the scandal of hunger in the world, of poverty, of children who die because they lack water, food, the necessary care," Francis said.
"We cannot look the other way in the face of any kind of abuse of children. We must all fight this scourge together. "We cannot close our eyes to the many brothers and sisters of ours who, due to conflict and violence, misery or climate change, leave their countries and often meet a sad fate".
The Catholic Church has been hit by a long string of scandals regarding the sexual abuse of children by clergymen in many parts of the world.
"We must not remain indifferent to the trampled and exploited human dignity, to the attacks against human life, both that which has not yet been born and that of every person in need of care," Francis continued.
"We cannot, we must not look the other way when believers of various faiths are persecuted in different parts of the world.
"The use of religion to incite hatred, violence, oppression, extremism and blind fanaticism, as well as to force people into exile and marginalization, cries out for revenge before God.
"But the arms race and nuclear rearmament also cries out for revenge before God. And it is immoral not only the use but also the possession of nuclear weapons, which are so destructive that even the mere danger of an accident represents a grim threat to humanity.
"We must not be indifferent to the many wars that continue to be fought and which claim so many innocent victims".