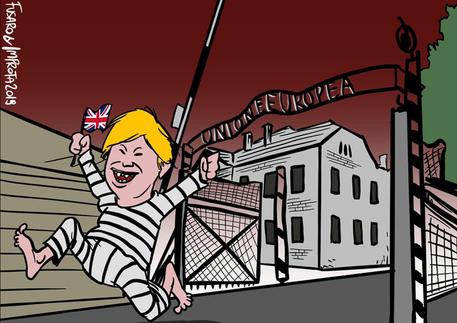 (ANSA) - Rome, December 16 - Rome Mayor Virginia Raggi has revoked a free collaboration with artist Mario Improta following his controversial cartoon comparing the EU to the Auschwitz concentration camp, well-informed sources said Monday.
The mayor spoke on the phone with the cartoonist and asked him to immediately suspend the collaboration, the sources said.
Improta's cartoon represented a smiling man resembling British Prime Minister Boris Johnson waving a British flag as he flees the EU portrayed as the concentration camp.
This followed Johnson's electoral victory in Britain last week.
The illustration, which was subsequently changed by the artist to compare the EU to a toilet, prompted a wave of indignation, with Rome's Jewish Community and the Auschwitz Memorial among those to condemn it.
The illustrator was set to draw a series of educational cartoons for schools in the capital.