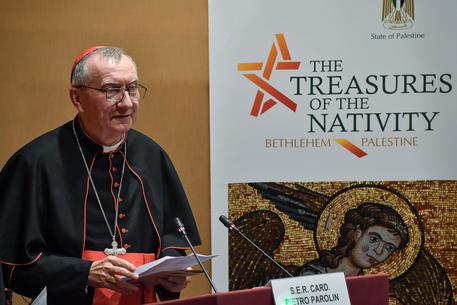 (ANSA) - Rome, December 11 - Vatican Secretary of State Cardinal Pietro Parolin on Wednesday came out in favour of the grassroots 'Sardines' movement that has sprung up around Italy in opposition to populist and anti-migrant policies such as those allegedly carried out by former interior minister and nationalist opposition League party leader Matteo Salvini.
"I'm not a member of the Sardines (but) I think it is important to grasp everything that is good also in these movements and try to valorise it always for the good of the country," he said.
"That is my wish, that the positive energies be highlighted above all...that these positive pushes should be placed at the service of the country's welfare".
The Sardines sprang up in Bologna in mid-November as a spontaneous response to Salvini's vow to "free" the Emilia Romagna region of the centre-left politicians who have governed it for decades, in regional elections in January.
Sardine rallies have since taken place across the length and breadth of Italy.
There will be a major rally Saturday in Rome's Piazza san Giovanni, traditional gathering place of the left.
One of the Sardines Roman leaders embarrassed the movement by appearing to invite the neo-Fascist CasaPound group to take part in the Rome rally.
This prompted the original four Bologna promoters of the movement to stress that it is anti-Fascist and will "never" have truck with groups like CasaPound.
CasaPound has said it will attend the San Giovanni rally nonetheless.