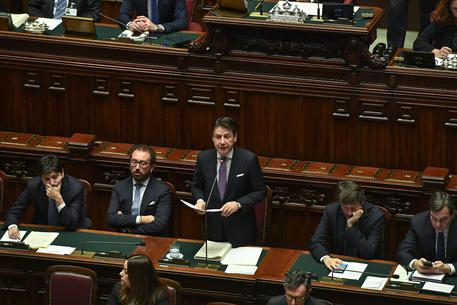 (ANSA) - Rome, December 11 - Premier Giuseppe Conte on Wednesday challenged opposition politicians who have blasted the government over the reform of the European Stability Mechanism to say whether what they really want is for Italy to quit the eurozone. "It is necessary to be careful about alluding to doubts and creating fears in the Italian people," Conte said as he reported to the Lower House on the ESM. "Some of the positions outlined during the public debate have revealed the thinly concealed wish to take our country out of the eurozone or even outside the European Union. "If this is the aim, then it would be best to clarify this in an explicit way so that the public debate is transparent and the Italian citizens can be informed about all the implications of that those positions entail".
The issue of the eurozone's bailout fund has roiled Italian politics for weeks, with the centre-left opposition alleging the government has agreed to a reform that cannot be amended and risks putting Italy under fresh pressure on the financial markets. But there have also been differences within the government, with the the 5-Star Movement (M5S) leading the drive for the ESM overhaul to be changed.
Conte told the Lower House on Wednesday that Italy has nothing to worry about. "Italy has nothing to fear because its debt is fully sustainable, as the assessments of the main international institutions, including the (European) Commission, show and as confirmed by the markets," Conte said.
The parties supporting Premier Giuseppe Conte's government reached an agreement on the reform of the ESM during a meeting overnight, M5S sources said on Wednesday.
"The line that the reform must be part of a package of changes has been upheld," the M5S sources said. "There will be another passage in parliament in January before the next Eurogroup meeting. "Parliament will be involved before the next steps are taken.
"Every decision will be taken after listening to parliament, no blank cheques will be signed".
A majority resolution on the ESM reform was approved by 291 votes to 222 on Wednesday.
In the Senate, meanwhile, between three and five 5-Star Movement Senators were said to be considering leaving the party and joining the nationalist populist opposition League over fears about the ESM reform.