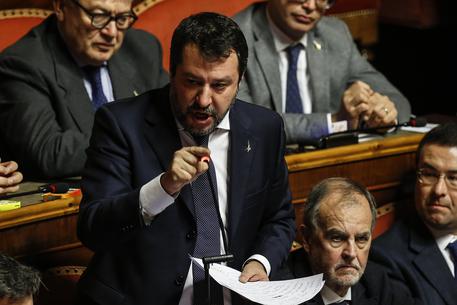 (ANSA) - Rome, December 3 - Opposition League leader Matteo Salvini on Tuesday denied he was aware of changes to the European Stability Mechanism (ESM) when he served as deputy premier and interior minister in the previous cabinet, as claimed by Premier Giuseppe Conte in a speech to Parliament on Monday.
"Someone in the government is saying the truth and someone is lying", Salvini said.
"Nobody ever showed me the text of changes to this treaty and it is also thanks to us that we are talking about it".
"Parliament needs to be able to intervene on that text", he said.
Salvini's previous government partner, Foreign Minister and 5-Star Movement (M5S) leader Luigi Di Maio on Tuesday responded saying: "We knew that the ESM had reached a certain point of its reform, but also that it was part of a package that included the reform of the bank union and insurance on deposits".
"These three things go together for the M5S and it is not possible to do one thing at a time", he continued.
"We will decide how and if the ESM reform will pass", Di Maio concluded.
Conte on Monday blasted the center-right opposition as he reported to the Lower House about the ESM after the reform of the eurozone's bailout fund caused a controversy in Italy. "The accusations made in recent days by several opposition figures about a lack of information or consultation over such a sensitive issue are completely false", said Conte, who also served as premier in the previous government.
The reform, which is set to be signed off later this month, would make the ESM more similar to the IMF, with support for States in financial difficulty made conditional on debt restructuring.
Italy is considered by experts to be vulnerable to market turbulence due to its huge public debt of over 2,000 billion euros.
The center-right opposition said the ESM reform penalizes Italy and is "not amendable" by Parliament after Conte agreed to it.