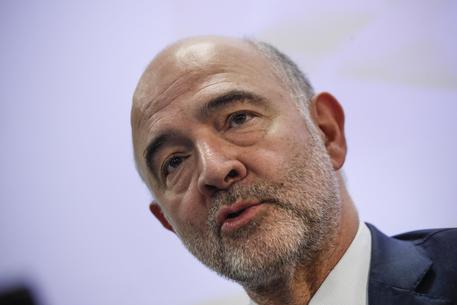 (ANSA) - Rome, November 22 - A planned reform of the European Stability Mechanism (ESM) bailout fund is not a problem for Italy, European Economic Affairs Commissioner Pierre Moscovici said Friday.
He said an "automatic" mechanism on restructuring debt had been avoided in the reform.
Under the reform, Moscovici said, Italy would not end up under the "tutelage" of the EU. Moscovici added that he had discussed ESM reform with Premier Giuseppe Conte and Economy Miniuster Roberto Gualtieri.
The EU is set to sign off next month on a reform that would make the ESM more akin to the IMF, with support for States in financial difficulty made conditional on debt restructuring.
Italy is considered by experts to be vulnerable to market turbulence due to its huge public debt of over 2,000 billion euros.
The reform was agreed by European finance ministers in June.
Premier Conte is said to be thinking about trying to postpone the reform at an EU summit next month.
The proposed reform sparked a bad-tempered clash between Conte and opposition leader Matteo Salvini this week.
Conte on Wednesday accused rightwing nationalist League leader Salvini of being in a state of delirium after the latter said the former had agreed to the ESM reform in secret.
The reform of the eurozone's safety net was negotiated in June, when Salvini was interior minister and deputy premier in Conte's first government.
Conte said Salvini had OK'd the reform "unbeknownst to him", echoing a jibe made years ago about then interior minister Claudio Scajola's denial of the purchase of a flat overlooking the Colosseum.
"Today we have discovered that negotiations have been taking place for a year - there is collective delirium about the ESM that has led the leader of the opposition, the same one who took part in talks on the ESM, and has not realised that he was at the (talks) table without knowing it," Conte said.
Salvini responded by calling Conte a "liar" and saying that the League had "always been against the ESM reform".
Plans to reform the ESM are causing turmoil within Conte's government with Foreign Minister Luigi Di Maio saying Wednesday that an overhaul of the eurozone's bailout fund that punishes Italy must be averted.
"A reform of the ESM that crushes Italy is not feasible," 5-Star Movement (M5S) leader Di Maio told Wednesday's Corriere della Sera.
In June, when the finance ministers OK'd the reform, Giovanni Tria was Italy's economy minister under Conte's first government, which was backed by the 5-Star Movement (M5S) and the League.
Since then Gualtieri of the centre-left Democratic Party (PD) has replaced Tria after a new coalition was formed following League leader Salvini's decision to pull the plug on the first Conte government in August.
Conte is reportedly aiming to postpone the overhaul, sources said earlier this week.
A reassessment of the sustainability of Italy's debt is "already envisaged", the Bank of Italy said Wednesday on the proposed reform of the ESM.
It said a reform of the ESM's charter "does not envisage nor announce a mechanism for restructuring sovereign debts".
Gualtieri said Wednesday that "the reform of the ESM does not in any way introduce the need to preventively restructure the debt to accede to financial support".
He said "Italy has not needed, does not need, and will not need ESM loans" since its debt "is sustainable and has a dynamic that is under control, also thanks to the prudent fiscal policy and supporting growth which the country is implementing.