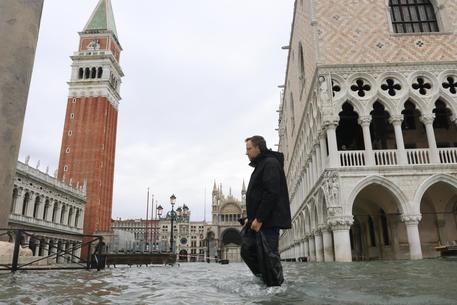 (ANSA) - Venice, November 18 - Venice got some respite Monday from its worst flooding in 50 years.
The lagoon city tried to make a fresh start after the third day of acqua alta (high water) above 150 com in the last week including a disastrous flood that killed two people last Tuesday.
Schools and museums reopened Monday and the vaporetti were plying the city's waters again.
Authorities and business people continued to to up the cost of the flooding, which is expected to run into the hundreds of millions of euros.
Meanwhile a state of alert for more acqua alta remained in force.
Venice Mayor Luigi Brugnaro closed St Mark's Square due to fresh flooding in the city on Sunday.
The city has been brought to its knees and two people killed after suffering its second-worst floods on record last week, with the high-water mark reaching 187cm on Tuesday.
The cost of the damage, which did not spare St Mark's Basilica, is estimated to run into hundreds of millions of euros and it prompted the central government to declare the city in a state of emergency on Thursday.
The water level had dropped down significantly but it went back up to 154cm on Sunday morning before slowly receding.
As result, water bus services were suspended and the city's Palazzo Ducale museum was closed too.
This past week has been Venice's worst for floods since 1872, sources said Friday.
Never, since that year, have there been two floods above 150 cm in the same year, let alone the same week, source said after the lagoon city endured a 187 cm high tide on Tuesday and a 154 cm one Friday.
And never since 1972 has Venice seen three floods above 140 cm in the same year, let alone the same week, including Wednesday's 144 cm event.
The first real practical tests of MOSE, Venice's new flood-barrier system whose lack was slammed in this week's disastrous and deadly flooding, will begin testing next year, the Consorzio Venezia Nuova consortium told ANSA Friday.
Experimental raising of the barriers is already scheduled for the whole of 2020, it said, at a rate of one every 45 days.
There has been controversy over a failure to ready the MOSE project in time for Monday's 187 cm tide that wrecked the lagoon city and killed two people.
The government on Thursday named former state property agency Demanio chief Elisabetta Spitz as new extraordinary commissioner for the MOSE project.