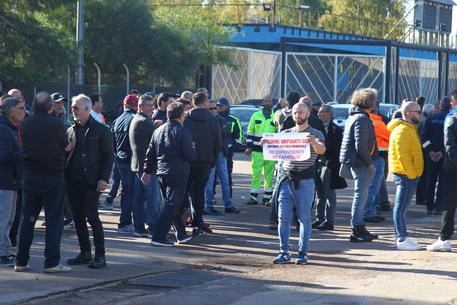 (ANSA) - Milan, November 18 - Rocco Palombella, the secretary general of the UILM union, told Radio1 Zapping on Monday that A.Mittal has said it has suspended the procedure to switch off the altoforno 2 furnace at the Taranto steelworks.
Claudio Marangoni, head of a Milan court business court handling the ArcelorMittal-ex-IILVA case, had on Monday set a hearing for the urgent appeal filed by commissioners for November 27.

Marangoni urged ArcelorMittal to stop shutting down activities at the Taranto steelworks.
"The dispute is complex," said Marangoni.
ArcelorMittal's failure to comply with a deal on taking over the former ILVA steel group is "glaring and full-blown", the group's three commissioners say in an appeal filed Friday against the Franco-Indian giant's announced pullout.
According to the appeal, ArcelorMittal is obliged to "diligently safeguard the integrity and value of the branches of the company".
The steel giant accepted the contract without guarantees, the commissioners added.
They also ArcelorMittal's attempt to rescind its contract to take over the former ILVA steel group is effectively a "malicious attempt to force a rearrangement (of contractual obligations) with violence and threats".
The commissioners said the reasons for seeking to abandon the deal "have nothing to do with the justifications given" and that the group "evidently does not consider what was previously negotiated to be in its interests any longer".
ArcelorMittal has shown "devastating offensiveness" in demanding a pullout, the commissioners said.
The leaders of Italy's big three trade union federations, CGIL, CISL and UIL, will be received by President Sergio Mattarella at 19:30 Monday to discuss the ArcelorMittal case and other industrial crises, union sources said.
The Franco-Indian group, the world's largest steelmaker, has said it is pulling out of the former ILVA group including its troubled Taranto steelworks, sparking opposition from the government and unions and the opening of two criminal probes, one in Milan and one in Taranto.
Some unions have aid they will not obey ArcelorMittal's order to shut down Taranto by December 4.
Premier Giuseppe Conte on Friday vowed to stop ArcelorMittal's pullout.
Conte said Friday that ArcelorMittal was "assuming a very great responsibility" in shutting down the former ILVA works in Taranto and quitting a deal to take over the group, and would pay damages in court.
He said the government would not let the shutdown continue.
Conte said the decision to stop production in Taranto, Europe's largest steelworks, "is a clear violation of the contractual commitments and grave damage to the national economy.
(ArcelorMittal) will answer for this in a judicial forum both as far as compensation for damages is concerned and as far as the urgent procedure is concerned.".
Conte said the government had filed its appeal against ArcelorMittal's pullout bid and welcomed a probe by Milan prosecutors into possible evidence of a crime in the planned exit.
ArcelorMitttal CEO Lucia Morselli told unions it was now a "crime" to work in the Taranto blast furnace areas, and that "legally the contract must be dissolved".
"We'd like to have a magic wand but we haven't got one," she said, reiterating that the lifting of a penal shield against prosecution for a cleanup of the highly polluting works in the Puglia city was grounds for the Franco-Indian giant, the world's largest steel group, to pull out.
In the latest twist, she warned that the shutdown would boost emissions in Taranto, where emissions have already been linked to years of higher than normal cancer rates.
The extraordinary commissioners of the former ILVA group's steel works earlier Friday filed an urgent petition to a Milan court to stop ArcelorMittal rescinding the contract to take over the group, including its troubled Taranto factory.
The decision by the Franco-Indian steel giant, the world's largest, to pull out of the takeover deal has rocked Premier Conte's government.
Unions say that the company has prepared a plan to gradually turn off the plant's furnaces and is determined to have pulled out by December 4, leaving the commissioners in charge of implementing the plan. ArcelorMittal said it needs to pull out citing the lifting of a 'penal shield' that protected managers involved in a clean up of the Taranto plant from prosecution and the necessity of shedding 5,000 workers across the group, which employs over 8,000 people in Taranto and some 3,000 more in Genoa and Novi Ligure.
ArcelorMittal has "no legal right" to pull out of the deal, , Industry Minister Stefano Patuanelli told A.Mittal executives at the summit with trade unions on the future of the group Friday.
A.Mittal said that after the shutdown it will take six months to start up again.
The UILM trade union said after the summit, which unions said had "gone badly", that "the workers won't turn off the plant".
While the Milan prosecutors are looking into possible financial wrongdoing, their Taranto colleagues are probing possible irregularities linked directly to the works there.
Some Italian newspapers, including La Repubblica and Il Messaggero, on Monday reported that ArcelorMittal might be willing to continue its year-long stewardship of the former ILVA group if the penal shield is restored.