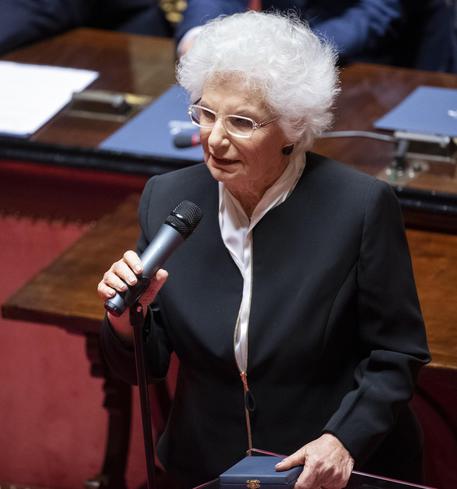 (ANSA) - Rome, October 31 - Ruth Dureghello, the president of Rome's Jewish Community, on Thursday expressed dismay that the rightwing League and Brothers of Italy (FdI) parties and Silvio Berlusconi's centre-right Forza Italia (FI) did not vote in favour of creating an extraordinary commission against hate, racism and anti-semitism.
The motion to create the commission, proposed by Holocaust survivor and life Senator Liliana Segre, was approved on Wednesday by the Upper House with 151 votes in favour, none against and 98 abstentions.
"The commission is a great institutional result for our country, it has great value," said Dureghello.
"The abstention of some parties is disconcerting. It's a decision that we consider wrong and dangerous.
"At the moment there is a need for unity. "There should be no room for ambiguity". Segre said Monday of the social media haters who post an average 200 racist messages a day against her that they are "people to be pitied or treated".
Vatican Secretary of State Cardinal Pietro Parolin voiced concern about the abstentions too. "I'm worried in the sense that, some things, some fundamental values, should be felt by all of us," Parolin said.
"There are certain things that we should be in agreement about".
Berlusconi responded to the concerns by saying "I must reject with force all exploitation of the vote expressed by Forza Italia.
"But as liberals we are against an excess of legislation on crimes of opinion and the motion put to the Senate yesterday, on which Forza Italian abstained, outlined, at the request of the Left, the institution of a new crime of opinion." He added: "I expect that in the Movement I founded, no one should permit themselves to advance doubts about our commitment at Israel's side.
He said that if some people wanted to follow other "paths, they were "free to do so but without further damaging FI".
Segre was named Senator for life by president Sergio Mattarella on 19 January 2018. Born into a Milanese Jewish family in 1930, Segre was expelled from her school at the age of eight after the promulgation of Italian Racial Laws in 1938. In 1943, at 13, she was arrested with many members of her family and deported to Auschwitz. After 1990 she started to speak to the public, especially young people, about her experiences.
Matteo Salvini's anti-migrant Euroskeptic and nationalist league has been accused of being far right while the smaller nationalist FdI has been accused of harbouring neo-Fascist sympathies.
FI is part of Europe's centre-right and Christian Democrat family of parties.