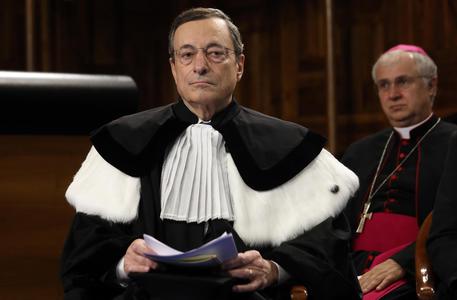 (ANSA) - Milan, October 11 - European Central Bank President Mario Draghi said Friday he was optimistic about the future of Europe.
"I'm optimistic about the future of Europe...and the euro is more popular than ever", he said a ceremony granting him an honorary degree from Milan's Cattolica University.
"A more active budget policy in the eurozone would make it possible," he added "to regulate the ECB's policies more quickly.
"The ECB's policies have been shown to be valid," he added.
Draghi said those who had harboured doubts about "the creation of the European Union, the introduction of the euro and the ECB's operations" were now being "doubted".
He said experts were today often called into question, but "knowledge is useful".
Finally, Draghi said it was "unfounded" that the ECB had increased inequality.