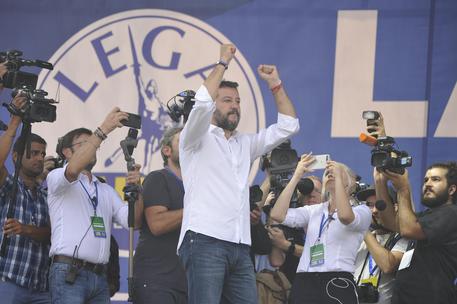 (ANSA) - Milan, September 16 - League leader Matteo Salvini on Monday dismissed criticism that he exploited a minor by bringing a girl involved in a criminal case about fostering on to the stage of a political rally at Pontida on Sunday. "Who cares?" the former deputy premier and interior minister told 7gold TV.
"(I'd have) not one, but 50 children. "If someone steals children from their parents, they are the criminals. "Other cases like this will come out". The child Salvini brought in stage was one of the minors who were allegedly the victims of malpractice by social workers in the town of Bibbiano in Emilia-Romagna.
Social workers are alleged to have coached and coerced kids into saying their parents were abusing them so that they could be entrusted to 'friendly' families for a profit, according to investigators.
The case has gained headlines and sparked political rows after it emerged that the local mayor, a member of centre-left Democratic Party (PD), was under investigation in relation to it. The PD formed an alliance with the League's former government partners, the 5-Star Movement, for a new executive under Premier Giuseppe Conte after Salvini pulled the plug on the first Conte administration last month.