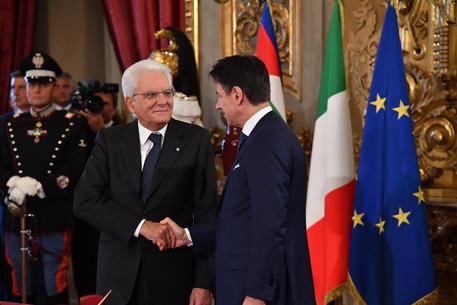 (ANSA) - Rome, September 5 - Premier-designate Giuseppe Conte's second government, an alliance between the anti-establishment 5-Star Movement (M5S) and the centre-left Democratic Party (PD), was sworn in Thursday with immigration, the budget and the high-speed rail (TAV) link from Turin to Lyon among its major challenges.
As economy minister, Roberto Gualtieri will have to forge a 2020 budget to stave off a 23-billion-euro VAT hike, cut the tax wedge and implement a minimum wage while keeping the European Commission on side.
But as a long-time MEP, he is said to have the experience of Europe that will be essential for the job. As interior minister, Luciana Lamorgese will be tasked with changing the hardline anti-migrant policy of her predecessor, anti-migrant Euroskeptic League party leader Matteo Salvini.
But as former prefect of Milan she has expertise in forging a more inclusive migrant policy than Salvini, who barred NGO rescue ships from Italy's ports and stripped asylum seekers of basic rights. As transport minister, Paola De Micheli will be asked to oversee the government's stance on the TAV - the excuse which Salvini used to pull the plug on the last government on August 8, citing persistent M5S opposition to completing the project.
De Micheli's PD is in favour of the project, like the League was, but M5S sensitivities will have to be considered even though Conte said in July that the TAV would cost more to shut down than to complete.
With an average age of 47, the government is the youngest in Italian history.
It also features a third of women ministers, seven out of the 21.
The government has 10 M5S ministers, nine from the PD, and one from the small leftwing Free and Equal (LeU) party, which also supports the government, as one technocrat in Lamorgese.
Following is the list of ministers in Giuseppe Conte's government: *Luigi di Maio (M5S leader) at foreign ministry *Luciana Lamorgese (technocrat) at interior *Lorenzo Guerini (PD) at defence *Roberto Gualtieri (PD) at economy *Alfonso Bonafede (M5S) confirmed at justice *Stefano Patuanelli (M5S) at industry *Nunzia Catalfo (M5S) at labour *Paola De Micheli (PD) at transport and infrastructure *Enzo Amendola (PD) at European affairs *Teresa Bellanova (PD) at farm policy *Roberto Speranza (LeU) at health *Lorenzo Fioramonti (M5S) at education *Sergio Costa (M5S) confirmed at environment *Dario Franceschini (PD) at culture with tourism brief *Fabiana Dadone (M5S) at civil service *Paola Pisano (M5S) at technological innovation *Giuseppe Provenzano (PD) at ministry for south *Elena Bonetti (PD) at equal opportunities *Vincenzo Spadafora (M5S) at youth policy and sport *Federico D'Incà (M5S) at relations with parliament *Francesco Boccia (PD) at regional affairs *Riccardo Fraccaro (M5S) cabinet secretary