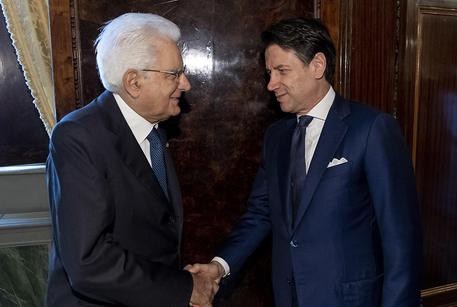 (ANSA) - Rome, August 29 - Italian President Sergio Mattarella on Thursday handed outgoing Premier Giuseppe Conte a mandate to form a government, presidency secretary general Ugo Zampetti said after the two men met at the Quirinal Palace.
Conte, as is the usual practice, reserved the right to accept the mandate pending talks with the two parties supporting the government bid, the anti-establishment 5-Star Movement (M5S) and the centre-left Democratic Party (PD).
The M5S-PD government would replace the M5S-League administration which nationalist League leader Matteo Salvini brought down earlier this month, citing M5S inaction.
Premier-designate Conte will try to form a government on the basis of an existing agreement, certified by consultations with Mattarella, between former fierce foes the M5S and the PD.
Among the chief hurdles, aside form a programme between parties with very different stances on many issues, is the role of M5S leader Luigi Di Maio who appears bent on trying to remain as deputy premier.
Another sticking point is the M5S's determination to put any government deal to its rank-and-file members on its online Rousseau platform where it has always ratified major policy decisions.
PD leader Nicola Zingaretti said "we need the courage to try to end the season of hatred".
Conte, once portrayed as a puppet of Di Maio and Salvini's, came into his own with a resignation speech to the Senate in which he made a blistering attack on "the irresponsible opportunist" Salvini, accusing the nationalist leader of trying to capitalise on surging poll numbers in trying to go to the country in a snap election.
Conte blasted Salvini's "obsession" with migrants and his cavalier and "offensive" use of religious symbols, among other things.
The speech, which put Conte firmly in the M5S camp, also won widespread plaudits from the left.
Conte, 15 months ago a political neophyte plucked from an academic career in law to act as "guarantor" of the M5S-League government, Italy's first all-populist coalition, was seen as eloquently condemning Salvini's alleged act of hubris.
It will now be up to him to bring together the widely divergent M5S and PD stances.
As for one-time strongman Salvini, who desperately tried to reverse pulling the plug on the government once he saw the possible M5S-PD tie-up, he will be licking his wounds in opposition and appealing to the public against what he says is an "unnatural" administration that betrays the will of the people.