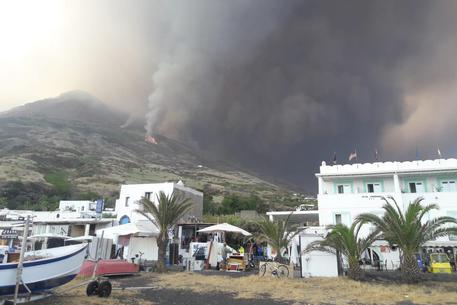 (ANSA) - Stromboli, August 28 - A powerful explosion occurred Wednesday shortly after noon at Italy's Stromboli volcano with sand, ash and other volcanic material falling on the surrounding area. Some sources on the ground said that the eruption, which was preceded by a massive boom, was stronger than the one on July 3 that killed a hiker. No victims have been reported. The latest eruption was felt by tourists and residents on the island and others close to it in the surrounding archipelago. A very high column of smoke was seen even kilometres away.
Incandescent material that came out led to a fire in the area near the summer of the volcano and in the Forgia Vecchia area on the inhabited side of Stromboli. Small fires were also reported in the Ginostra area, where many people went to a church - which can be reached only via sea - nearby in order to protect themselves from the ash and volcanic material. It was on Ginostra that the hiker Massmo Imesi, 35, from Milazzo, was killed when taken by surprise by the eruption.
He was with a friend who survived.