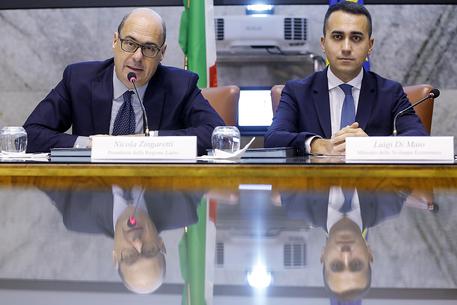 (ANSA) - Rome, August 23 - The anti-establishment 5-Star Movement (M5S) and the centre-left Democratic Party (PD) on Friday started talks both sides described as "constructive" on possibly forming a coalition government replacing the M5S's alliance with the nationalist League which League leader Matteo Salvini sank earlier this month.
"There are no unsurmountable problems", texted one of the Democratic Party PD delegation members after the first session of the talks.
PD Senate Whip Andrea Marcucci said that "the meeting took place in a positive and constructive climate, which makes us hope for the best on the prospects (for a deal)".
PD House Whip Graziano Delrio said that "there was ample convergence on the points of the environmental and social agenda. There is very serious work to be done on the budget bill, on the priorities".
PD deputy leader Andrea Orlando said that "we will prepare the dossiers necessary for talks on all the issues of the programmatic agenda, we await approval by the leaders of the two parties. We want to be operational in the next few hours".
Orlando said the PD had asked that the M5S exclusively talk to the PD and not hold any talks with former ally the League.
M5S sources said that the talks had taken place in a "constructive climate" too.
They said the M5s had stressed the need to cut 345 MPs as a "fundamental point" for any alliance. "We need guarantees on this aspect," the M5S sources said.
President Sergio Mattarella has given the former fierce foes until Wednesday to try to put together a new government to last until the end of the legislative term in 2023.
M5S leader Luigi Di Maio laid down 10 conditions for the government including a conflict of interest law, reform of State broadcaster RAI, cutting the tax wedge, a minimum wage, justice reform, green policies and, crucially, a reduction in the number of MPs and Senators from 945 to 600, not counting five life Senators.
PD leader Nicola Zingaretti set five conditions including a change from Salvini's tough anti-migrant stance and his closed-ports policy for NGO migrant rescue ships. The PD was initially reported to be against cutting the number of MPs but is now said to be coming round to the idea, as part of a wider electoral reform restoring 100% proportional representation.
As part of any deal, the two parties would also have to come up with a proposed premier and there is speculation Italy might get its first woman premier in former justice minister Paola Severino, or Constitutional Court Vice President Marta Cartabia.
However, there is still a slim chance of the M5S reviving its alliance with the League if Di Maio accepts Salvini's offer of the M5S leader becoming premier in a restored M5S-League alliance.
Mattarella will hold fresh consultations on resolving the government crisis starting Tuesday with officials and the small parties and ending Wednesday with the PD, League and M5S.
He has asked for a "solid and lasting" coalition to serve out the term to 2023, saying that early elections, probably on October 27, are the only alternative.
The new government will have to pass the 2021 budget law and avert a 23-billion-euro VAT hike.
The two delegations started talking at two o'clock in the afternoon.
Amid reports of PD infighting, Di Maio said the centre-left group was already quarrelling" even before the talks had started.
"These people are already quarrelling, we knew them quite well, unfortunately..let them get their ideas straight", "he said, reiterating that cutting MPs from 945 to 600 was "the start of any talks, it must be done at once.
"If you don't have the first point there's nothing else," he said.
The M5S leader was speaking after former PD leader and ex-premier Matteo Renzi accused former premier and now PD Chair Paolo Gentiloni of wanting to sink the M5S-PD bid by setting the condition that the M5S would have to give up on the MP cut.
That alleged attempt by Gentiloni has failed, Renzi said.
Zingaretti strongly denied any such attempt on the part of the PD chair and former premier.
Gentiloni never made any "manoeuvre" to sink PD-5-Star government talks and saying so is "ridiculous and offensive," Zingaretti said Friday, denying Renzi's claim.
"We are in the midst of extremely delicate consultations and we are all working together to reach a difficult objective," Zingaretti said.
"This is to give life to a turning-point government to change Italy; and this needs a united spirit, to defend the contents, history and values of the Democratic Party".
"I must once again, for the umpteenth time, make an appeal for responsibility: fundamental to reach this objective is to stop the continual proliferation of communiqués, quips, interviews which, indeed, put everything at risk and undermine our credibility".