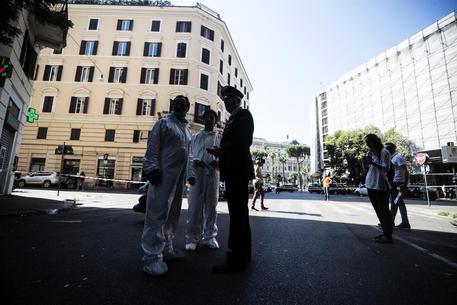 (ANSA) - Rome, July 26 - A massive manhunt has been launched for two men thought to be from North Africa after an on-duty Carabiniere police was stabbed to death in the Italian capital in the night between Thursday and Friday. The 35-year-old Carabiniere Deputy Brigadier Mario Cerciello Rega is believed to have been with other colleagues in the process of arresting two men believed to be behind a case of theft and extortion when one of the men pulled out a knife and stabbed him several times.
Both men were able to escape.
Cerciello Rega was taken to the hospital but died of the injuries sustained in the attack.
He was stabbed eight times, with one of the blows hitting the heart.
He leaves behind a widow, whom he married just 43 days ago.
"They killed him," the woman said in tears at the mortuary of the Santo Spirito hospital.
Cerciello Rega was a popular figure who did volunteer work in addition to his regular job.
Around 100 friends and relatives from his region of origin, Campania, came up to Rome to pay their respects.
"Mario was a lovely lad," said Sandro Ottaviani, the commander of Rome's Piazza Farnese Carabinieri station.
"He never held back at work and he was figurehead for the whole district.
"He always helped everyone. He did voluntary work, accompanying sick people to Lourdes and Loreto.
"Every Tuesday he went to Termini train station to feed the needy". The attack took place in via Pietro Cossa, in the affluent and central Prati district of Rome.
He was in the process of detaining two men who were trying to extort 100 euros from a person in exchange for the return of a stolen bag. At least four people are being questioned at a Carabinieri barracks in relation to the case. Premier Giuseppe Conte said the officer's murder was a "deep wound for the State".
President Sergio Mattarella sent a message to the Carabinieri expressing his "profound sadness" at Cerciello Rega's death and reiterating his esteem for the force.
Deputy Premier and Interior Minister Matteo Salvini vowed that the culprits will be brought to justice.
"My first thought goes to that 35-year-old lad, who has been married for a month and had just celebrated his birthday, and those two bastards," League leader Salvini told Radio Rai.
"We are working to catch them as soon as possible".