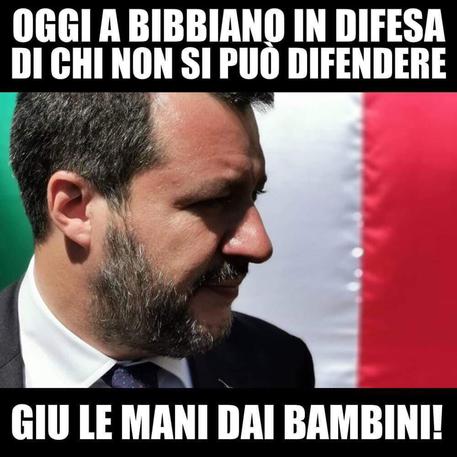 (ANSA) - Bibbiano, July 23 - Deputy Premier Matteo Salvini said Tuesday he would not "find peace" until all seven of the children taken from their families in a controversial fostering case involving alleged malpractice by social workers return to the family fold.
"I won't find peace until the last kid in Italy unjustly taken from his family doesn't go home to mum and dad," Salvini said at this town near Reggio Emilia where social workers are accused of coercing kids to tell lies about alleged parental abuse in order to get them stripped from their family and entrusted to 'friendly' families for profit.
Salvinis said his far-right League party's proposal for a commission of inquiry into foster homes would be approved by the "first few days in August".
"We'll go all the way, not only on the 10,000 children taken from their families in Emilia Romagna, but all over Italy," he said.
""It's a disgrace that there are people who have made a business even on the backs of children".
He added: "I urge anyone who knows of other abuses, anywhere in Italy, to report them to the interior ministry, if they want remaining anonymous, and we will make all the necessary checks".
Earlier Tuesday it was reported that four of the seven children involved in the Angels and Demons probe into allegedly coerced evidence of untrue parental abuse at Bibbiano had returned to their natural families from foster homes.
The decision by the Bologna minors court was taken some time ago, sources said.
Social workers are alleged to have coached and coerced kids into saying their parents were abusing them so that they could be entrusted to 'friendly' families for a profit, according to police.
The case has gained headlines and sparked political rows with the ruling 5-Star Movement (M5S) accusing the centre-left Democratic Party (PD) of involvement in the alleged coercion because the local mayor is PD.
The PD is suing the M5S for the allegations.
There has even been an unsubstantiated allegation that kids were given electric shocks to train them to provide the desired answers by the Turin-based Hansel and Gretel association.
The PD has pointed out the association received some M5S funding.
Salvini, for his part, said at Bibbiano Tuesday that "I will not attack the PD" on the Bibbiano children and the alleged fostering irregularities.
"I don't come here on a Tuesday afternoon to attack Renzi or Zingaretti on the Bibbiano children, clearly," he said.
"I'm not interested in the political solour, but saving children", he added.
M5S leader Luigi Di Maio, the other deputy premier, said on Bibbiano Tuesday "I'm disgusted by the PD's silence on the Bibbiano case".
Di Maio has previously called the PD "the party of Bibbiano", prompting former PD leader Matteo Renzi to say that Di Maio "disgusts me".