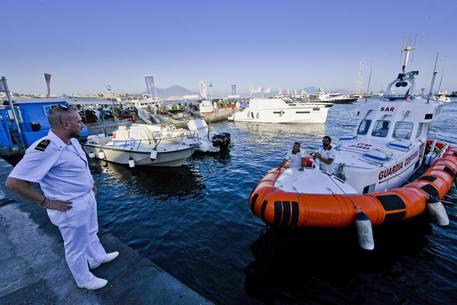 (ANSA) - Naples, July 8 - Marseille and former Italy striker Mario Balotelli was cited with three others Monday for betting a friend 2,000 euros to ride his motor scooter into the sea at Naples.
The former Inter, Milan, Man City and Liverpool centre forward, 28, was reported to Naples authorities for instigation to commit a crime and illegal gambling for getting his friend, Naples bar owner Catello Buonocore, to do the stunt.
Buonocore and two others were also cited.
Balotelli, who is not new to madcap stunts but appeared to have put them behind him, reportedly tried to avert judicial action by assuring police the scooter had been retrieved.
In recent years Balotelli has totted up thousands of euros in speeding fines.
Earlier in his career he controversially visited a Naples drug den and jokingly pretended to deal drugs there.
Balotelli has drawn significant media attention at times for his off-field antics.
In late 2011, he hit headlines with the British media reporting he had his new Maserati temporarily confiscated by police.
That same season he had to spend a night in a hotel because friends started a blaze with fireworks at his home.
He has also attracted attention for his anger about the racist abuse regularly directed at him in Italian matches and has threatened to walk off the pitch the next time this happens.
Perhaps the high point of his career were the brace of goals he got against Germany to put Italy into the 2012 European Championship final against Spain.
Italy boss Roberto Mancini, who put up with SuperMario's temper tantrums at Man City, has said the door to an Azzurri return is not definitively closed.