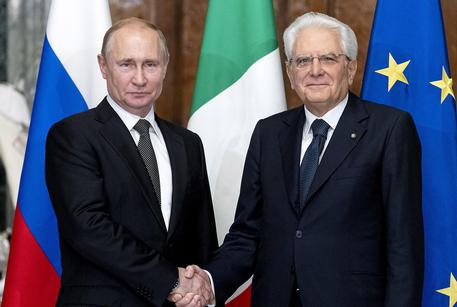 (ANSA) - Rome, July 4 - Russian President Vladimir Putin on Thursday arrived in Rome for a one-day visit to the Italian capital.
His first appointment was at the Vatican where he saw Pope Francis.
Later in the day he saw President Sergio Mattarella at the presidential palace and in the late afternoon saw Premier Giuseppe Conte at the premier's office.
Italy is in favour of lifting western sanctions against Russia, imposed for its intervention in Crimea and eastern Ukraine.
In an interview with Corriere della Sera ahead of the visit Putin spoke of "tried and tested" ties with Italy and said he was ready to restart dialogue on a broad strategic agenda with the United States.
This evening there will be a dinner at Villa Madama with deputy premiers Luigi Di Maio and Matteo Salvini.
They are the leaders of the two populist parties making up the government, Di Maio's anti-establishment 5-Star Movement (M5S) and Salvini's nationalist League party.
Salvini, who has outstripped Di Maio in the polls with anti-migrant and other hardline stances, has frequently voiced admiration for Putin and has more strongly than others advocated the dropping of western sanctions.
Finally, Putin will have a private meeting with Silvio Berlusconi, an old friend and mutual admirer.
Putin was accompanied by Foreign Minister Serghei Lavrov as well as the trade, energy, culture and health ministers.
Putin arrived in the Vatican for the audience with Pope Francis, his third, shortly after two o'clcok local - over an hour behind schedule.
The previous audiences with Francis were on November 25 2013 and June 10, 2015.
Putin has had six audiences with three popes in 19 years.
Putin was welcomed to the Vatican by the pope with a warm handshake.
Putin said on leaving Francis "thank you for the time you devoted to me and for the very substantial and interesting talks" while Francis told him "pray for me".
After presenting his delegation and exchanging gifts with the pope, Putin and his entourage also had talks with Secretary of State Pietro Parolin and Monsignor Paul Richard Gallagher, secretary for relations with States.
He then left the Vatican for the Quirinal Palace where he was met by Mattarella.
Putin was again over an hour behind schedule, which is nothing new for the Russian president.
In the past he has kept US President Donald Trump, German Chancellor Angela Merkel, and Queen Elizabeth of England waiting for some time.
However he recently arrived 30 minutes early for talks with North Korean President Kim Jong-un.
Putin arrived at the Italian premier's office for bilateral talks with Conte shortly before six o'clock.