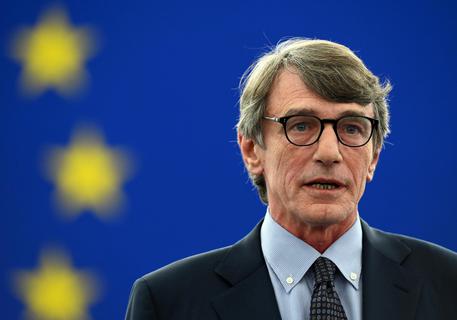 (ANSA) - Rome, July 3 - Centre-left Democratic Party (PD) MEP David Sassoli was elected president of the European Parliament on the second ballot Wednesday, garnering 345 votes, outgoing President Antonio Tajani said.
The required majority was 334.
"It's a great emotion, and I thank Tajani" he said.
Europe must recover the spirit of its founding fathers, Sassoli said in his maiden address.
It must "combine growth, social protection and a respect for the environment", he said.
The EU must also "relaunch sustainable investments", he said.
The centre-left Democratic Party (PD) MEP underscored his commitment towards boosting gender parity and encouraging "a great role of women at the top of the economy, politics and society".
Nationalism produces destructive conflicts, Sassoli went on.
"We are not an accident of history but the children and grandchildren of those who succeeded in finding the antidote to the nationalist degeneration that poisoned our history," he said.
"If we are European it is also because we are in love with our countries.
"But nationalism that becomes an ideology and idolatry produces viruses that spur instincts of superiority and produce destructive conflicts".
The European Council has the "moral duty" to discuss the European Parliament's proposed reform of the Dublin Rule on migrants because "you know how much tension is created around the non-management of the migratory issue," Sassoli said.
"Citizens are asking where the EU is" on the issue, he said.
"Europe must equip itself and the governments must transfer a little power to Europe, they must collaborate more".
The EP's doors would be "ever more open" to NGOs, he added.
"I hope Italy is happy today," he said about his election.
President Sergio Mattarella sent a message to Sassoli saying "the high responsibility which has been entrusted in you by the parliamentarians of the countries of the Union represents a mark of the broad confidence resting in your person and a recognition for your constant and fruitful work in European institutions".
Euroskeptic and anti-migrant League party leader Matteo Salvini, the deputy premier and interior minister, said "I hope he's balanced even though Sassoli spoke of a health cordon against the League and the populists, which doesn't exactly seem to be the most democratic approach for a president".
Sassoli, 63, a former RAI State broadcaster journalist, was one of the Strasbourg assembly's vice presidents.
"I'm standing because I believe that Europe will be stronger only with a European Parliament able to play a more important role," he told the assembly ahead of the vote on the new president to replace centre-right Forza Italia (FI) President Tajani.
"We must all, whatever our views, be committed to building the home of European democracy and this parliament must be the home of European democracy".
Sassoli was backed by the European Socialist caucus.
The other candidates were Ska Keller (Greens), Jan Zahradil (Conservatives ECR) and Sira Rego (Left GUE).