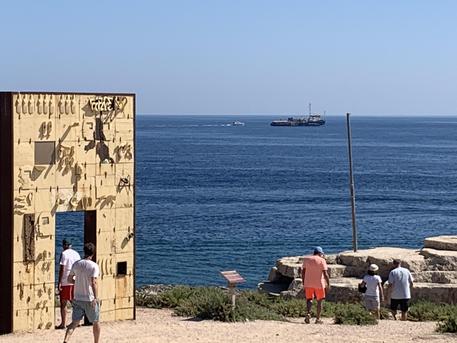 (ANSA) - Palermo, June 26 - The Sea-Watch 3 migrant-rescue ship on Wednesday defied an order from a tax police motor launch to stop and pressed on until it came close to the port of Lampedusa.
Carabinieri police were lined up on the quay.
Captain Carola Rackete, who has said she will land the 42 migrants on board despite a docking ban, risks a 50,000 euro fine and the impounding of the vessel.
She could also be probed for favouring illegal immigration.
The migrants have been at sea since they were rescued two weeks ago as Deputy Premier and Interior Minister Matteo Salvini refused permission to dock in Italy. Salvini said Wednesday that the ship had committed a hostile act and he called on the Netherlands to take in the migrants on board. The search-and-rescue ship flies the Dutch flag, although it is run by a German NGO. "The Dutch government cannot pretend nothing has happened," said League leader Salvini, who has spearheaded the government's tough stance of refusing access to NGO-run search-and-rescue ships to Italy's ports.. "A ship flying the flag of the Netherlands has ignored the bans (on entry) and the orders to stop and it is heading to Lampedusa. "It's a provocation and a hostile act. I had written to my Dutch counterpart and I'm happy that the Italian embassy in The Hague is taking a formal step with the government of the Netherlands. "Italy deserves respect. We expect the Netherlands to take in to immigrants on broad".