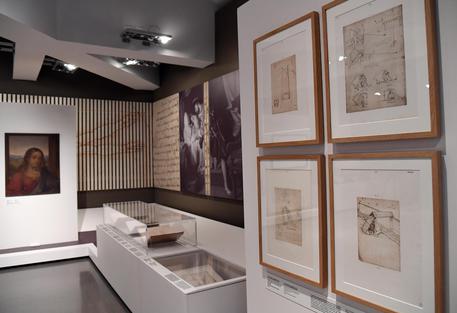 (ANSA) - Milan, June 24 - No one had ever heard its "voice" before: a warm, ancient sound similar to that of a flute conveying notes without hesitation. Under the wide windows of Palazzina Liberty, in the heart of Milan, Leonardo Da Vinci's Great Continuous Organ will be heard for the first time. The instrument is of sophisticated design and fed by a unique pedal mechanism that allows the music to play in a continuous manner without taking their hands off the keyboard. Centro Studi Leonardo 3 experts were the ones to reconstruct it five centuries later on the basis of the Foglio 76r drawings, bringing a new addition to the most complete collection of Da Vinci musical instruments in the world.
The collection is exhibited at the museum in Piazza della Scala.
From the gigantic trumpet to the musical cannon, every work by Da Vinci shows him to have been a 'mechanic' of music, ever in search of new technological solutions to facilitate the musician's work as well as endow the instruments themselves with energy. "Take, for example the clavi-viola, which was to have bene played by making use of the energy generated by the musician walking," said Edoardo Zanon, co-founder and co-scientific director of Leonardo3. divided inside of them "Or the continuous organ, where the air flow was ensured by two double bellows," he added. How the instrument works was shown by Saverio Tamburini, an expert in organs who took part in the reconstruction thanks to the centuries-long tradition and experience in his family. He noted that the "instrument does not need external sources of energy. You just need to use your legs and playing it is not tiring." Among those listening was culture councillor Filippo Del Corno, musician himself as well as a politician, who noted that music had linked Da Vinci with Milan, "since in his letter of introduction to Ludovico the Moor he noted his musical skills". As a skilled master of ceremonies, Da Vinci probably planned the organ for court celebrations, making use of the double bellows "to solve the problem of a lack of air that was typical of larger organs and that often required the presence of operators for air production during the musical performance," Zanon said. The double bellows design was later used by Da Vinci for two other instruments designed on the same page. "We often remember Da Vinci as a musician, referring to what Vasari wrote," the expert said, "but perhaps the most important aspect is his activities as instrument designer, always ready to mix technologies even very different from one another to get unprecedented abilities, like his flying machines did."