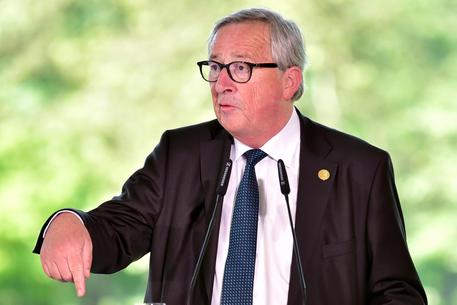 (ANSA) - Brussels, June 11 - European Commission President Jean-Claude Juncker said Tuesday the EC thought Italy was going the wrong way in fiscal terms and risked an infringement procedure for breaking the deficit and debt rules.
"We think that Italy is moving in the wrong direction, therefore we must take relevant decisions in this field, but I think that Italy risks in the next few years to be in the procedure for excessive deficits," he told Politico.eu in an interview.
Asked if Rome was a threat to European stability, Juncker replied "not yet".
Juncker said that he did not want to "humiliate" Italy but "this problem of Italy is a serious problem".
He said "I don't want to humiliate the Italian Republic with public declarations, because I have the greatest respect for various reasons, but we think that it is moving in a wrong direction.".

Premier Giuseppe Conte said Tuesday that he, as premier, did not need a mandate for budget
negotiations with the EC.
He said next year's budget must be forged "starting immediately" to give "clarity" to the country.
Asked about Juncker saying Italy was on the wrong track, Conte said "he got it wrong on Greece".
He said that Juncker should know that "we are convinced about our line, it is not recessive".
Conte added "if one day I were not to have a full mandate I would resign".

The government's proposed flat tax will be in the budget and the European Commission should permit
growth, Deputy Premier Matteo Salvini said Tuesday.
He added that 50,000 teachers on temporary contracts will get steady full-time contracts.
The government is set to frame the 2020 budget after talks with the EC on possibly breaking debt and deficit rules.
A flat tax is one of the key campaign pledges of Salvini's anti-migrant Euroskeptic League party.
Salvini added that the current government and majority, with the anti-establishment 5-Star Movement (M5S), "remain the only ones possible".