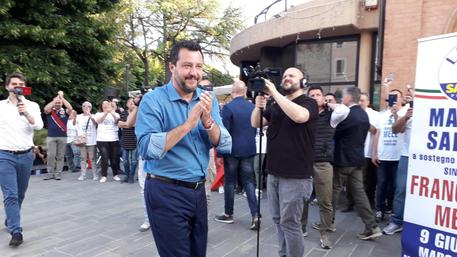 (ANSA) - Rome, June 6 - Deputy Premier and Interior Minister Matteo Salvini said Thursday that a small minority of judges in Italy are acting politically when making decisions. He was commenting after he said the government would appeal against several rulings regarding its policies on security and migration and named the judges who made them, saying they should have declared themselves incompatible because of their stances on these issues. Anti-migrant Euroskeptic nationalist League party leader Salvini told Mediaset television he was not drafting a black list of hostile judges.
But he added that "I take note of the fact that, while thousands of magistrates do their jobs honestly, some act politically, they write books and go to conferences in favour of open ports for migrants.
"Is it normal for a judge to go to a conference that is an advert for mass immigration to then judge the policies of the interior ministry?". The President of Florence's Appeals Court, Margherita Cassano, blasted the attack, which regarded one of the court's judges, among others.
"As president of the court of appeal, I feel duty bound to intervene regarding the moral lynching directed at Luciana Breggia, who has been exposed to danger to her safety because of the serious attacks she has suffered, given the media reverberations and the multiplier effect of the social media galaxy," Cassano told reporters.
Salvini retorted "there has been no lynching, no threats, no dossiers.
"I intend to use all the instruments envisaged by the law to find out if it normal an opportune that some magistrates, who publicly take sides against the government's policy, have adjudicated cases that involve the interior ministry.
"I'm sorry that the CSM (Supreme Council of Magistrates) has been dragged into this, which in these weeks has other things to thin about," Salvini said, referring to a case of alleged corruption, chronyism and jobs for the boys involving senior magistrates. "I'm working to ensure the safety and security of all Italians, magistrates included".
On Wednesday Salvini said he would appeal against the Florence-based RegionalAdministrative Tribunal (TAR)'s recent ruling against the high-security 'red zones' to be given extra policing under his recent directive.
Under the new move, city prefects will be able to replace mayors in ordering cops to keep criminals such as drug pushers outside designated urban areas, which are to be maintained better.
Salvini, who has been placed under investigation several times for stopping migrant rescue NGO boats, has been leading a crackdown on migrants, and on crime, which has helped him become Italy's most popular political leader.
In the recent European elections the League doubled, to 34%, the score it got in the March 2018 general election.
Its government partner the 5-Star Movement (M5S), by contrast, saw its vote halved to 17%.