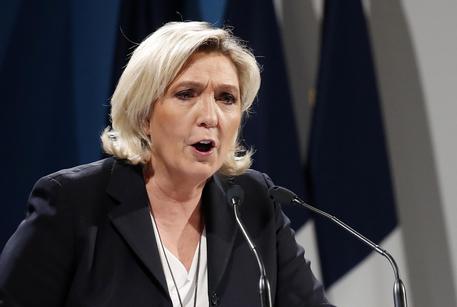 (ANSA) - Rome, April 4 - French and Hungarian rightist leaders Marine Le Pen and Viktor Orban will not attend League leader and Deputy Premier Matteo Salvini's meeting in Milan Monday aimed at forging a European-election alliance between 'sovereigntist' parties, sources said Thursday - while the League said their presence "was never envisaged".
Le Pen will not attend the gathering, the spokesman for her National Rally party, Alain Vizier, told ANSA Thursday.
Le Pen is busy on the election trail, he said.
This weekend she will be in Brittany while next week she has other appointments in other parts of France, Vizier said.
Orban will also skip the meeting called by Euroskeptic and anti-migrant League leader Salvini, a source close to the Nepszava newspaper said Thursday.
Orban, the source said, does not want to break with the European People's Party (EPP), and is hoping to avoid expulsion from it and steer it rightwards after the May European elections.
Therefore, the source said, he is "not interested" in Salvini's initiative.
Interior Minister and Deputy Premier Salvini is organising an event in Milan to bring together "all European allies of the League" to "propose a reform to the European Union", he said last month.
"About 20 movements to propose a new Europe of nations with," Salvini said.
Among the 'sovereigntist' rightwing nationalist parties invited were Orban's Fidesz, Le Pen's National Rally (formerly Front National), Germany's AfD, and Poland's Law and Justice party.
AfD confirmed Thursday it would be attending Monday.
Salvini aims to forge a panEuropean alliance for the European elections at the end of May.
But Orban's Fidesz is not sending any representative to the Milan gathering, the newspaper source said Thursday.
The League's foreign chief Marco Zanni said after Le Pen and Orban's moves that "on Monday Matteo Salvini will launch at a press conference his call for unity of all the parties that want to change this Europe and which are today present in the European Parliament although they are not in our political group." He said Monday's meeting would be "the first step towards enlarging our family.
"No division, no rudeness," Zanni said.
League sources added: "the participation of Le Pen and Orban in Monday's initiative was not envisaged.
"Our historical allies have been informed of all the initiatives and share our goals".
Salvini said the news of Le Pen and Orban reportedly skipping the meeting was "surreal".
"If someone was not invited and does not come I think that's normal," he said, branding the reports of the leaders allegedly pulling out "fake news".
He said "Marine Le Pen isn't there because it wasn't envisaged, how can I be disappointed if I didn't invite her." In any case, he said, "I spoke to Viktor this week and I'll see Marine tomorrow".