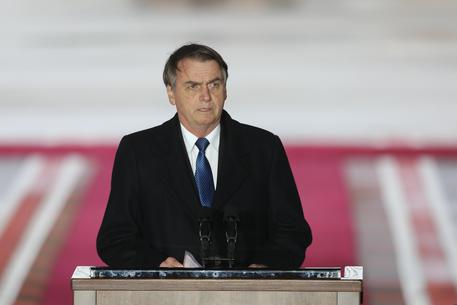 (ANSA) - The war of words between Brazilian President Jair Bolsonaro and Rodrigo Maia, the President of the Chamber of Deputies, has caused alarm among traders due to the possible repercussions the tension could have for the pension reform.
But the pipes sector remains "full of hope" for the rest of the year. Carlos Eduardo Baptista, the president of the Brazilian Association for the metal pipes and accessories industry (Abitam), admitted in an interview with ANSA though that he did not expect this "clash" between the executive and the legislature and that enthusiasm has been "dampened a little".
On the other hand, he does not use the word "disappointing" to describe the economic performance of early 2019. "It (the tussle between Bolsonaro and Maia) surprised us all, but we are still hopeful," Baptista said. The Abitam president stressed that approval of the pension reform is the starting point for a reorganization of the Brazilian economy and the attraction of investment. The holdup of the recent days, however, showed that the project could take longer than expected to be finally approved. "Everything is still suspended," argued Baptista, stressing that he would be satisfied with a 1% growth rate for the sector.
Some projects are already moving forward, such as the concessions the government decided on at the start of the year and initiatives regarding the crude presale deposits, but the effects should be felt in the medium and long term. The Abitam representative said that January and February were "a little better" than last year for the pipes industry, although March was not good. FUTURE After an intense exchange of criticism, Bolsonaro and Maia announced they had agreed on reconciliation to help the adoption of the pension reform which, in turn, could help revive optimism - the last two days of trading on the Sao Paulo bourse in March were up after falls for seven consecutive days. Before the clash between the two, the Ibovespa index had registered a period of growth-upon-growth and it even went over the 100,000-points mark for the first time. Furthermore, last week the government raised 2.719 billion Brazilian real from the auction of a section of the North-South railway and another 2.3 billion dollars from concessions regarding 12 of the country's airports. The expectation is that the economy will improve in the second half of the year and this could be an incentive for Tubotech, the sector's main trade fair. Organized by CIPA Fiera Milano and Abitam, the event taking place in Sao Paulo October 1-3 is orientated towards this segment's big clients, such as the oil, gas, car, building, mining and petrochemical sectors.
Brazilian and international producers of pipes, valves, pumps, joints and components such as BTL Steel Works, Citic Pacific Steel, Golan Plastic, HSG Laser, HTIDC, Inductotherm, Intras, Kent do Brasil and Nacional Tubos will be among the exhibitors. "There are still some things to fix and regulate on the fiscal side, but the pensions reform is a starting point," Baptista concluded.
"There is a road map of actions that need to be applied to make the economy more ordered and this path starts with the pensions".