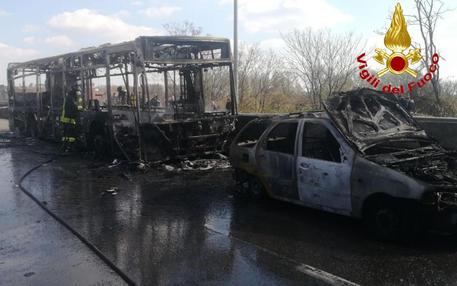 (ANSA) - Crema, March 21 - Oussenyou Sy, the man who hijacked a bus with around 50 schoolchildren on board and set light to it on Wednesday, has definitive conviction for harassing a minor, sources said on Thursday. Sy, a 47-year-old from Senegal who has Italian citizenship, was handed a definitive one-year suspended prison term in 2018 in relation to harassment of a 17-year-old girl that took place in 2010.
The man was also convicted for drink driving in 2007, the sources said.
He managed to hide the conviction from his employers - Autoguidovie, the company that operated the school bus - by going on sick leave during his ban from driving, according to investigative sources. The terror of the children from a middle school in the northern province of Cremona lasted for almost 40 minutes as the man, angry at government migrant policy, confiscated their phones and said no one would survive. But one boy, 13-year-old Rahmi, managed to keep hold of his phone and call the police. After being stopped by police, Sy got off the bus and set it alight, having poured petrol inside. But the Carabinieri managed to get the children out by smashing windows at the back. Investigators are trying to track down a video that Sy recorded before the hijacking, giving his reasons for it, and which he sent to acquaintances in Italy and Senegal.
He mentioned the video during questioning late on Wednesday, sources said.