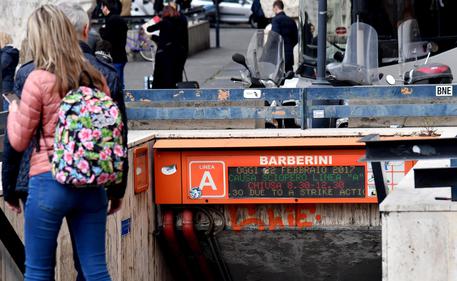 (ANSA) - Rome, March 21 - The Barberini station on the A line of the Rome metro was closed on Thursday after a step on an escalator gave way.
The problem is a significant inconvenience for commuters and tourists as the station serves an central area near to popular places such as the Trevi fountain and Via Veneto.
Furthermore, the next station on the A line, Repubblica, has been closed since an October 23 accident in which 20 CSKA Moscow supporters on their way to a Champions League clash against AS Roma were hurt when an escalator went berserk.
Access to the Barberini station and another A line stop, Spagna, was repeated disrupted in the Christmas period due to issues linked to the escalators.
Rome Mayor Virginia Raggi, who gas come under fire over this and other problems with Rome's public transport network, said the contactor for maintenance of the stations' escalators may be dumped.
"The length of time is takes to get spare parts and the anomalies that have occurred in the last few months with the escalators are unacceptable," said Raggi, a member of the 5-Star Movement (M5S). "The annulment of the contract MetroRoma has with the company that maintains the escalators should be considered".