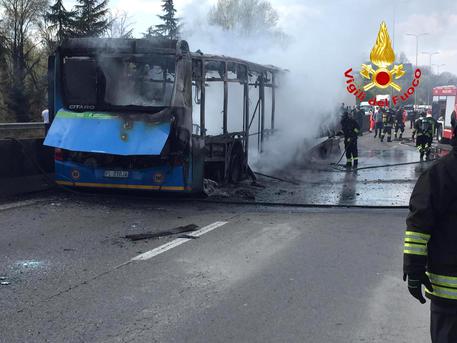 (ANSA) - Milan, March 20 - A 47-year-old bus driver was held by Carabinieri police on Wednesday after allegedly hijacking a bus with schoolchildren aboard and subsequently setting it on fire after tying their hands with plastic electrical ties in an apparent attempt to kill them, sources said.
The children's terror lasted for almost 40 minutes as the man, angry at government migrant policy, confiscated their phones and said no one would survive.
But one boy, 13-year-old Rahmi, managed to keep hold of his phone and call the police.
The man hijacked the bus with 51 pupils from a middle school in the northern province of Cremona.
The suspect has been named as Ousseynou Sy, a man with a criminal record who is originally from Senegal but has been an Italian citizen since 2004.
He said he wanted to kill himself and "stop the deaths in the Mediterranean," the sources said.
Sy ordered a teacher to tie the children's hands with plastic ties but the teacher only attached the ties to four or five of them, and so lightly that they easily freed themselves afterwards, local sources said.
"No one will survive," Sy said after hijacking the vehicle outside San Donato near Milan, according to Carabinieri Provincial Commander Luca De Marchis.
After being stopped by police, he got off the bus and set it alight, having poured petrol inside.
But the Carabinieri managed to get the children out by smashing windows at the back, the sources said. Before being stopped, the suspect had also tried to ram through a road block. Twelve children and two adults were taken to hospital after suffering smoke inhalation, as was Sy, the sources said.
The bus is a write-off.
A teacher who was with the children said that it was not the first time Sy drove a bus with pupils on board.
"We knew him" the teacher said, adding that the hijacker was angry about the government's migrant policy.
"He wanted to get to the runway at (Milan's) Linate (airport)".
The children's ordeal lasted nearly 40 minutes, local sources said.
A girl said "he handcuffed us and threatened us. He said that if we moved he would pour our the petrol and light the fire. He kept saying that people in Africa are dying and the fault is Di Maio and Salvini's. Then the Carabinieri saved us".
Luigi Di Maio, the anti-establishment 5-Star Movement leader, and Matteo Salvini, leader of the anti-migrant Euroskeptic League, are the two partners in Italy's populist government which has closed Italy's ports to migrant rescue NGO ships amid a broader crackdown on migrants.
Another girl said "he took our phones but one schoolmate managed to keep his. We were cuffed with electrician's ties. He told us nothing would happen but threatened to pour the petrol".
Rahmi's friend Adam, 12, said "he was clear-minded, he was smart. The driver took all our phones but he managed to keep one and called the Carabinieri".
"Later I called the emergency services and we tried to explain where we were".
Sy will face possible charges of kidnapping, attempted mass murder, causing a fire and resisting arrest, judicial sources said.
"It was a miracle they survived and we have to thank the Carabinieri for that," said Milan prosecutor Francesco Greco.
He said the prosecutors were weighing terrorism charges against Sy.
"The intention to commit mass murder had started ad the man was about to torch (the children) as he then did the bus," said Greco, thanking Carabinieri for an operation that was "like something that you see in films about special forces".
Greco said Sy had admitted his actions had been premeditated.
Sy did not pronounce Islamist phrases, sources said.
Prosecutors said they were trying to establish if Sy, who was employed by the Autoguidovie bus firm, was fit to drive.
Carabinieri questioned Sy's wife who left the Carabinieri barracks at Castelleone without saying anything to the media.