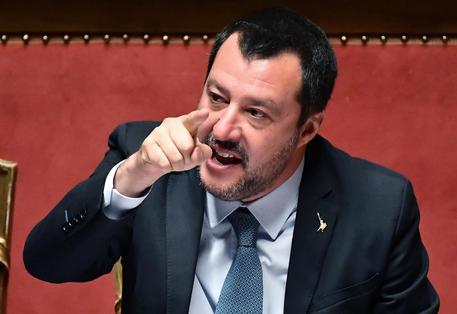 (ANSA) - Rome, March 20 - The Senate on Wednesday voted against granting authorisation to prosecutors in Sicily to proceed with a case of alleged kidnapping against Interior Minister Matteo Salvini for refusing to allow over 100 migrants to disembark from the Diciotti coast guard ship for several days during a standoff with the EU last summer. The result will not be official until voting stops at 19:00 but the electronic screen in the Upper House already shows that the majority is against stripping Salvini, who is also Deputy Premier and League leader, of his parliamentary immunity. Earlier on Wednesday Salvini told the Senate that his handling of the case protected the interests of the Italian people. "I'd have to lie to the Senate of the Italian people in order to go to trial and say that I did not act for the public interest," League leader Salvini said.
So the senate floor has backed the decision last month by the upper house's parliamentary immunity panel not to lift Salvini's immunity to face trial in the case. Salvini's League and the lawmakers from his coalition partners, the 5-Star Movement (M5S), were expected to vote against stripping the minister of his parliamentary immunity as was Silvio Berlusconi's opposition centre-right Forza Italia. But some members of the M5S were unhappy about this stance and one of the movement's Senators said he would buck the party line.