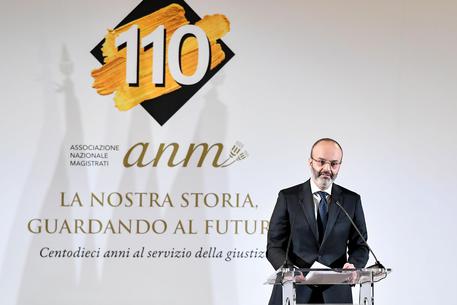 (ANSA) - Rome, February 27 - A new law expanding the right to legitimate self defence is not needed, magistrates union ANM said Wednesday, sparking a row with Interior Minister Matteo Salvini who is sponsoring the bill but has agreed to postpone it to please his government partner the 5-Star Movement.
"The postponement of the parliamentary discussion of the bill is good news, and let's hope it will be indefinitely postponed," ANM chief Francesco Minisci said.
Salvini countered by saying Minisci's remarks were of "an unheard of gravity, it's not up to magistrates to say what laws are needed or not.
"Let me put their minds at ease, both the Corriere della Sera and the leftwing magistrates: the legitimate defence bill will be law by the end of March".
The ANM also said Salvini's visit to a businessman who got a jail sentence for shooting a thief was "an invasion onto our pitch".
The bill expanding the right to legitimate self-defence from intruders will hit the House floor on March 5, whips said Wednesday.
The bill, fashioned by Interior Minister Matteo Salvini, will introduce norms similar to US 'stand your ground' laws.
Salvini on Sunday made his controversial jail visit to a Piacenza businessman, Angelo Peveri, serving four and half years for forcing a Romanian burglar to kneel and then shooting him in the chest on his factory premises in 2011.
The burglar survived, and Peveri was convicted of attempted murder.
His sentence became definitive when it was upheld in the third tier of Italy's judicial system last year.
Justice Minister Alfonso Bonafede, an M5S member, said the government was "united" on the bill and that "the sooner it is approved the better".
"I understand that you may take it as a sign of a rift but the course of the bill is very clearly mapped out".