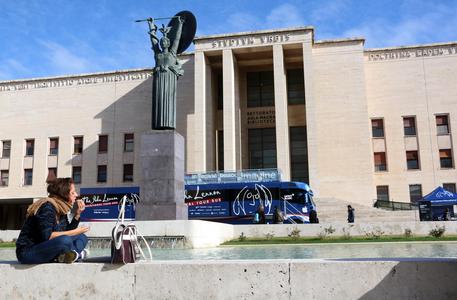 (ANSA) - Rome, February 27 - The performance of Italian universities has improved in this year's newly released edition of the QS World University Rankings, which focuses on leading institutions by region and subject.
Italy this year came in fourth in Europe - after Great Britain, Germany and France - and seventh in the world for the total number of universities included in the most-consulted global rankings worldwide.
Rome university La Sapienza was the only Italian institution that ranked at the top for classical studies and ancient history.
Italy moreover ranked third in Europe after the United Kingdom and Germany and seventh in the world for the total number of positions it holds this year.
The rankings include 41 Italian universities.
The area of life sciences and medicine of Italian universities is the most represented in the world ranking.
As far as single subjects are concerned, the rankings included physics and astronomy, medicine, economics and econometrics.
In particular, the Polytechnic in Milan was the only Italian university to rank among the top 10 in three subjects; Bocconi University, also in Milan, ranked eighth for business and management, gaining two positions compared to last year.
It also rose 11 positions in finance, conquering 18th place and keeping its 16th position in economics.
The Polytechnic in Turin made it into the ranking for the first time in minerals engineering for which it gained 24th place.
Other debuts included the University of Bologna in dentistry (44th place) and the University of Pisa in library studies (50th place).
La Sapienza, the University of Bologna (Unibo) and the University of Padua were the Italian institutions most represented in the rankings while the Italian cities with the highest number of ranked institutions were Milan with seven, Rome with four and Pisa with three.
A total of 18 Italian universities were ranked among the top 100 in 36 different subjects.
Overall, Italian universities occupied 521 positions in the ranking with 192 remaining unvaried compared to last year, 166 that improved, 85 downgrades and 78 new entries.
Compared to last year, Italy boosted its presence in all rankings, including among the top 50 (with 34 this year compared to last year's 29) in the top 100 (98 in 2019 from 83 last year) and in the top 200 (236 from 213).
Ben Sowter, who is in charge of research and analysis at QS, said the trend in Italy was "noteworthy", especially considering "fierce global competition" in the international academic world.
Nevertheless, the positive result was reported as the OECD warned that Italy ranked eighth for the number of emigrants, including one-third who are university graduates.
Italy spends on education one percentage point less (4% of GDP) than the European average, with 164,000 euros per undergraduate and 228,000 for a PhD graduate.
Yet, Sowter noted, other countries are increasingly benefiting from this investment as Italy is struggling with a brain-drain phenomenon.