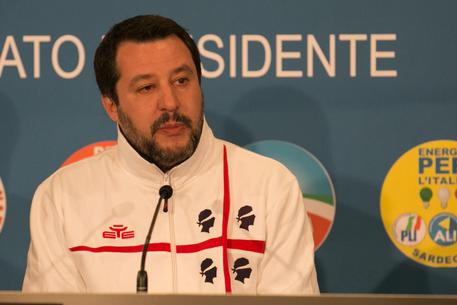 (ANSA) - Rome, February 22 - The completion of the Turin-Lyon high-speed rail (TAV) link has not been stopped but the project has merely been "revised with the aim of bringing the project to completion," Deputy Premier, Interior Minister and League party leader Matteo Salvini said on Italian TV Friday.
Salvini is in favour of completing the TAV while his government ally, the 5-Star Movement (M5S) of Deputy Premier and Labour and Industry Minister Luigi Di Maio is against it.
The M5S is pointing to a cost/benefit analysis commissioned by the government which has said the project spells a loss of 7-8 billion euros.
"There is no block on the TAV," Salvini said on Mattino 5.
"There is only a revision of the project with the goal of taking the project to completion.
"I'm doing and I will do everything possible to make sure the TAV is completed, the project can be revised and money can be saved, but the train pollutes less and costs less than cars.
"The building work was already stopped and I hope it gets back up running as soon as possible".
Piedmont Governor Sergio Chiamparino on Friday called for a "popular consultation" or referendum on whether to complete the rail link or not.
Salvini reacted by saying: "We are always and in all cases favourable to referenda".
The House on Thursday approved a motion from the M5S and the League committing the government to "wholly rediscuss the Turin-Lyon high-speed rail (TAV) line project, applying the accord between Italy and France".
A tussle between the government coalition partners over the controversial rail link has been going on for months now.
The M5S has long been against the project and its calls for the project to be ditched have increased after the new report commissioned by the transport ministry said it has a negative cost-benefit balance of seven to eight billion euros.
Salvini reiterated on Thursday that he thinks it should go ahead. "The aim is to revise the project, save where it is possible to save, and move forward," Salvini said. But Foreign Ministry Undersecretary Manlio Di Stefano of the M5S said the project should be terminated.
"It's a project that would cause the Italian people to lose seven billion euros," he said.
"As far as we are concerned, it should be stopped completely".
Transport Minister Dario Toninelli said Thursday the M5S would find a solution on the TAV with the League "at most in two weeks".
"At most in two weeks time we will communicate the solution.
We'll find a solution with our government allies," he said.
Toninelli added: "Enough talking about the TAV. The citizens want to hear about so many other projects".
European Commission President Jean-Claude Juncker said Thursday that it was up to France and Italy to decide whether to press ahead with the TAV. "It's a decision that the two republics, France and Italy, must take," Juncker told reporters. "We'll see who wins".