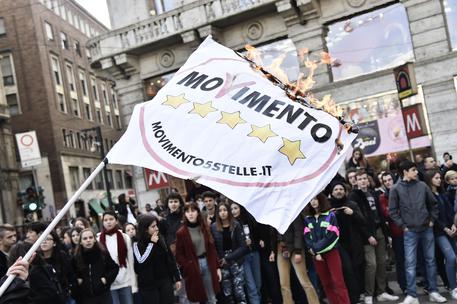 (ANSA) - Rome, February 18 - 5-Star Movement (M5S) members on Monday started online consultations to decide whether M5S lawmakers on a Senate panel should vote to lift League leader and Interior Minister Matteo Salvini's parliamentary immunity to face kidnapping charges over migrants held on board the Diciotti coast guard ship in a standoff with the EU last August.
Magistrates in the Sicilian city of Catania have requested authorization from parliament to proceed against Salvini, who is also deputy premier.
Salvini has said the case should not be allowed to proceed as he was doing his job as minister.
The M5S is the League's senior partner in Premier Giuseppe Conte's coalition government.
The movement appears split on whether to vote on the immunity panel for or against allowing the kidnapping charges against their ally Salvini to proceed.
"I can guarantee that the government will not collapse," Salvini said.
"I don't fear the court of the people".
Salvini also said that "we're all in the same boat" referring to Conte, fellow Deputy Premier Luigi Di Maio, the M5S leader, and Transport Minister Danilo Toninelli, also of the M5S, who wrote in statements to the panel that the interior minister was implementing the policy of the whole government.
Sources said the result of the vote would be known at about nine thirty on Monday evening.
Salvini said he is "not asking for favours or help from anyone" in the vote.
"If, to defend the borders of my country, the safety of Italians, to defend the national interest, it brings me and will bring me other charges and other investigations, I'm very ready to face them," Salvini said.
Salvini has also threatened to take legal action if reports of a possible deal within the government over the Turin-Lyon TAV high-speed rail line and the Diciotti cases continue.
"I'll sue the next person who talks about that," League leader Salvini said during a visit to the central city of Terni last week. Salvini says the project should go ahead but the M5S are opposed to it.