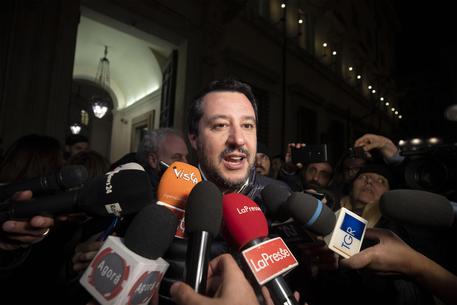 (ANASA) - Rome, February 15 - Italy has no intention of leaving the European Union, Deputy Premier and Euroskeptic League leader Matteo Salvini said Friday after the League's economic pointsman Claudio Borghi said Rome should exit the EU if it is "still toxic" after May's European elections.
"We have no intention of leaving Europe, we want to change it, improve it bit not abandon it," said Salvini, who is also interior minister.
League economy pointman Borghi said earlier Friday that Italy should consider leaving the EU if the bloc does not change radically following the May 26 European elections. "I think that this is the last chance. If, after the European elections, the same mandarins led by Germany are the ones driving the economic, social and migratory policies, for the sole benefit of Germany and to our detriment, I'll say we should leave," Borghi said.
"We either manage to change it or we'll have to come out".
The League MP said the EU project was a "failure" and "toxic for Italy".
"If the environment remains toxic, I'll say let's get out," he said. Rome should say clearly if it wants to exit the European Union, European Parliament President Antonio Tajani said.
"Let the Italian government say clearly whether it wants to leave the euro and the European Union," Tajani said on Twitter.
"Too many ambiguities and ill-considered declarations only cause harm to Italy and the Italians".