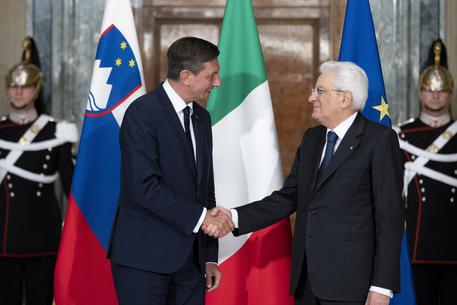 (ANSA) - Rome, February 14 - President Sergio Mattarella replied to a Slovenian complaint about Italian officials' statements on Foibe Remembrance Day by saying he was concerned about verbal excesses in the EU, the office of Slovenian President Borut Pahor said Thursday.
"I share Your concerns regarding the climate that is sometimes registered in Europe today", Mattarella wrote in his letter to Pahor.
"I find, in fact, a raising of tones myself also, a lower consideration for the opinions of others, verbal excesses that should not have a place in our common European home".
On the remembrance day for the thousands of Italian victims of Tito's partisans, Deputy Premier and Interior Minister Matteo Salvini said the children who died in the Foibe mountain pits and the children of Auschwitz "are the same".
Deputy Forza Italia President Antonio Tajani, the European Parliament President, meanwhile ended a speech by saying "long live Italian Istria and Dalmatia".
These statements spurred protests from Slovenia and Croatia.
The Foibe is the name given to the mass murder of Italian people in Venezia Giulia, Istria and Dalmatia, mostly by Yugoslav Partisans, during and after the Second World War.