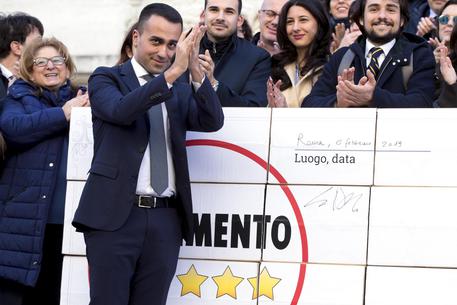 (ANSA) - Strasbourg, February 13 - The 5-Star Movement (M5S) on Wednesday kicked off the process to select its MEP candidates for May's European elections.
It will be possible to make a bid to be a candidate via the M5S's Rousseau IT system until February 25.
The process features an innovative merit system in which candidates are awarded credits for various factors, such experience of volunteering for the M5S, having a degree and good foreign language skills.
The budding MEPs with more credits will appear higher up on the M5S's list of possible candidates for the selection process, via a vote of M5S members.
The rules stated that M5S leader Luigi Di Maio will have the final word on which candidates run and who heads the M5S candidate lists. It said the M5S candidates who are elected will have to put 1,000 euros of their monthly MEP salary into a fund that the movement donates to causes for the benefit of the public. Candidates have to provide proof they do not have a criminal record and anyone who has stood for office for another party since the M5S was formed in 2009 is not be eligible.