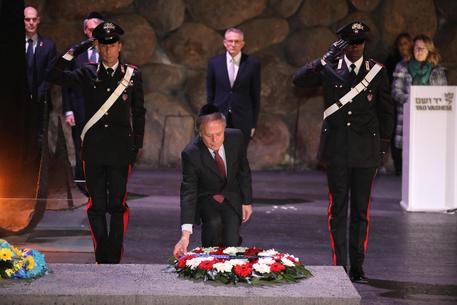 (ANSA) - Jerusalem, January 28 - Israeli Prime Minister Benjamin Netanyahu met on Monday with Italian Foreign Minister Enzo Moavero Milanesi, where the leaders discussed topics including Iran, bilateral cooperation, and the EastMed gas pipeline.
Netanyahu spoke about "Iran's efforts to militarily entrench itself in Syria and its attempts to destabilise the Middle East".
He highlighted bilateral cooperation between Israel and Italy and said the two leaders spoke about the EastMed gas pipeline, with which he said "Israel intends to export its own natural gas to Europe, passing through Cyprus and Greece".
On Sunday, Moavero paid tribute to Holocaust victims at Jerusalem's Yad Vashem, the World Holocaust Remembrance Center.
He expressed "shame" on behalf of Italy for the 1938 racial laws and also touched on the topic of migrants.
"The Shoah was infinitely more horrible. It's also true, however, that the root is a lack of ability to understand and demonstrate humanity," Moavero said.(ANSAmed).