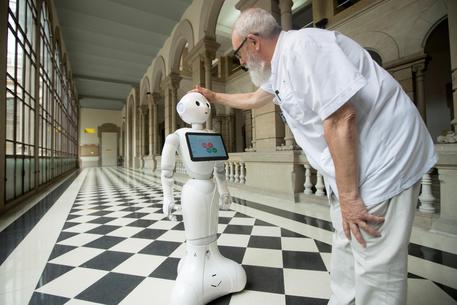 (ANSA) - Rome, January 23 - Humanoid robots are set to make their debut in Italian hospitals, medical sources said on Wednesday.
A two-to-three-year pilot scheme is set to start at the hospital in san Giovanni Rotondo near Foggia, which was originally built thanks to St Padre Pio.
It will then be extended to other Italian hospitals, as well as French ones, the sources said.
One robot, Pepper, will control wards, alerting doctors to emergencies.
Another, R1, will 'dialogue' with patients to gauge their emotions and make the first diagnoses.
"We decided to trial both robots because they have different characteristics: R1 is a research robot, while Pepper is already a commercial robot," said Francesco Puja from Konica Minolta's Rome lab. R1 was created thanks to collaboration between the Italian Institute of Technology (IIT) with Japan's Konica Minolta, which is specialised in artificial intelligence.
Pepper is produced by another Japanese company, Softbank.