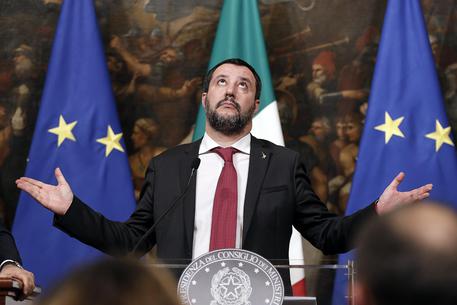 (ANSA) - Rome, January 22 - Interior Minister Matteo Salvini, facing harsh criticism over the closure of the CARA refugee centre in Castelnuovo di Porto in compliance with the security decree he spearheaded, on Tuesday dismissed charges of his being a racist or Nazi.
"Racist, fascist, Nazi ... to the left's foolishness I respond with facts, with work, with results, with lives saved, crimes decreased, money saved," Salvini tweeted.
On Saturday, Palermo's centre-left mayor, Leoluca Orlando, referenced Salvini in a statement calling the current migrant situation "genocide" and saying there would be "new Nuremberg trials".
The centre-left Democratic Party on Tuesday said that at Castelnuovo fathers, mothers and children were being allegedly split up in a move "that recalls the Nazi concentration camps".