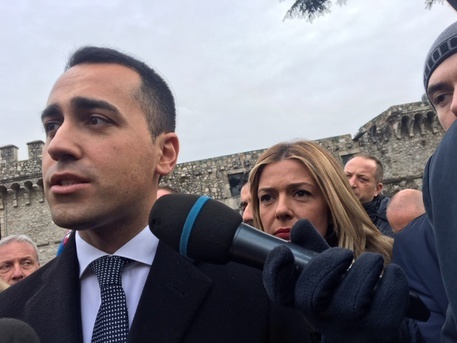 (ANSA) - Rome, January 21 - Italian Ambassador to France Teresa Castaldo was summoned to the French foreign ministry Monday over remarks Deputy Premier Luigi Di Maio made over alleged French policy in Africa, diplomatic sources told ANSA.
French diplomatic sources told ANSA Monday that Di Maio's remarks were "hostile and without cause given the partnership between France and Italy in the European Union." They said "they must be read in a context of Italian internal politics".
Castaldo was summoned by the cabinet chief of French European Affairs Minister Nathalie Loiseau over remarks Di Maio made at a rally Sunday, French media said.
The head of the anti-establishment 5-Star Movement (M5S), who is also labour and economy minister, said "if today people are leaving Africa is it because some European countries, with France in the lead, have never stopped colonizing tens of African States".
Di Maio said French President Emmanuel Macron "first lectures us (on migrants), then continues to finance public debt with the money with which he exploits Africa".
The deputy premier went on to suggest Brussels should impose sanctions on Paris and take the question to the United Nations.
Speaking on Italian radio Monday morning, Di Maio said Paris was allegedly "impoverishing" Africa with what he called "the franc of the colonies".
He said "in order to keep the Africans in Africa, it would be enough for the French to stay home. France should start opening its ports. We'll take migrants to Marseille until they stop minting the currency for Africa in Lyon".
After France summoned the ambassador, Di Maio said that "Africa must be decolonised" and the EU, too, "must deal with this issue".
He said "let's look the causes in the face, too, not only the effects of emigration. There are authoritative economists all over the world who talk about it, we have only lit the spotlight on a truth".