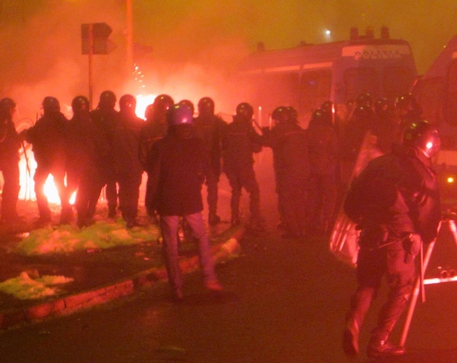 (ANSA) - Milan, January 17 - Italian police on Thursday arrested one of Inter Milan's hardcore ultra fan leaders in connection with scuffles ahead of the Boxing Day match with Napoli in which an Inter fan was killed.
Nino Ciccarelli was taken into custody in Milan, sources said.
They said another Inter ultra was also set to be arrested.
Ciccarelli, 49, founder of the Vikings ultra group in 1984, has been sentenced to 12 years in jail for various crimes and is still serving a five-year Daspo match attendance ban, sources said.
He was involved in scuffles at Ascoli in 1988 in which fan Nazareno Filippini was killed - a death over which he was arrested but later cleared.
Inter and Varese ultra leader Daniele Belardinelli, 35, was fatally run over during the scuffles, which occurred when Inter fans attacked a column of vehicles carrying Napoli fans.
Inter won the match 1-0.
Another four Inter ultras have been arrested over the incident including Marco Piovella aka 'Red', leader of the ultra Boys group, and Luca Da Ros, who has been helping police with their inquiries.
The number of people probed on charges of voluntary manslaughter and aggravated violence in the investigation in Milan on the clashes between Inter and Napoli fans has risen to 23, investigative sources said last week.
The voluntary manslaughter charge against all 23 suspects is a key technical step to move the investigation forward, the sources said.
Meanwhile, investigators are examining a second car seized by police in Naples, which reportedly has dents to verify whether they are compatible with the incident.