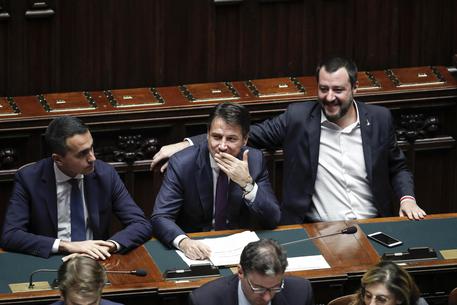 (ANSA) - Rome, January 17 - The decree that will bring in the government's two flagship measures - the 'citizenship wage' basic income for job seekers and the 'quota 100' pension reform that will reduce the retirement age for some people - was approved at a cabinet meeting on Thursday evening.
Premier Giuseppe Conte said that "this is a fundamental stage for this government experience, they are two measures that do not respond to extemporary electoral promises but constitute a project of social and economic policy of which this government is proud". Deputy Premier Luigi Di Maio said that no one will be able to abuse the basic income saying there were 'anti-couch' measures built into the decree.
He said the basic income would range between 780 euros and 1032 euros.
He said there would also be a "training pact" in the measure.
Di Maio said it took us just 20 minutes in cabinet to draft the new Italian welfare state".
Conte said that one million people would be able to retire earlier over three years.
The decree earmarks 22 billion euros in "real money", Deputy Premier Matteo Salvini said.
One million jobs will open up as one million people retire under the quota 100 scheme, Salvini said.
The government will now go ahead and realise all of its contract, Di Maio said.
"Everything has been resolved, Everything is fine. The text is ready," said earlier Labour Undersecretary Claudio Durigon after a meeting of top government figures, including Conte and his two deputies, Interior Minster Salvini and Labour and Industry Minister Di Maio.
Di Maio expressed satisfaction earlier on Thursday, with the cabinet set to approve the decree for a new basic income and a pension overhaul after the meeting of senior government figures.
"Today is an important day and, as always, the citizens are the winners," 5-Star Movement (M5S) leader Di Maio told ANSA. "It's a result that rewards the years of battles carried out by the M5S", said the leader of the anti-establishment movement.
The cabinet meeting to approve the decree began around six o'clock and was still going shortly before eight o'clock, sources said.
Officials were still hammering out the final details, sources said.
The cabinet meeting on the decree lasted only half an hour, sources said.
The examination of the decree for the government's 'quota 100' pension reform and its 'citizenship wage' basic income was put off last week amid government tension over a range of issues including the TAV high-speed rail line between Turin and Lyon.
The pension reform, amending an unpopular 2011 reform that raised the retirement age to 67, is the League's pet policy promise while the basic income is the flagship campaign pledge of the M5S.
Agreement has been found on allocations for early severance pay for state employees and for the Alitalia flight fund, sources said. State employees already at 'quota 100' will leave in August, the sources said.
After the introduction of the 'citizenship wage', the REI 'inclusion wage' basic income support will be eliminated but not for those already receiving it.