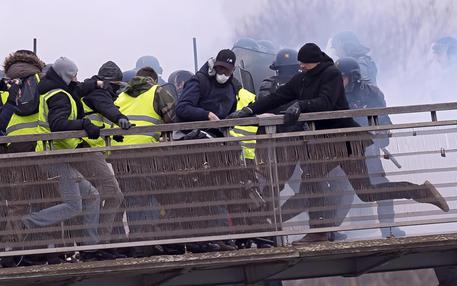 (ANSA) - Paris, January 10 - The French Minister of State for Gender Equality Marlène Schiappa on Thursday said that she intends to look into whether "foreign powers" are involved in online fundraising to help violent protestors within the yellow vest movement, Italy first and foremost.
"Who is funding the violence," she asked in an interview on France Inter, hinting that foreign powers including Italy were involved "given the position of certain Italian leaders".
The reference was to recent comments made by both deputy prime ministers. Deputy Premier and Labour and Industry Minister Luigi Di Maio hit back on Tuesday after French European Affairs Minister Nathalie Loiseau told Italian officials to butt out after expressing support for the Yellow Vests protest movement. Di Maio said Monday that his 5-Star Movement (M5S) was ready to provide support to the Yellow Vests while fellow Deputy Premier, Interior Minister and League party leader Matteo Salvini also voiced his backing for the protests.