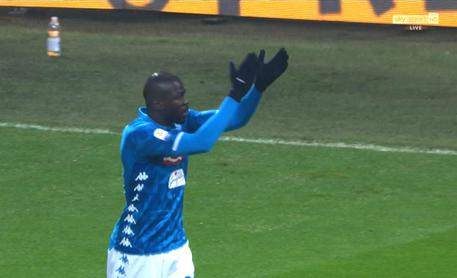 (ANSA) - Rome, December 28 - A row on an Inter fan death and monkey chants against Napoli defender Kalidou Koulibaly during Boxing Day's 1-0 Nerazzurri win rumbled on on Friday.
Interior Minister Matteo Salvini said it had been wrong to make Inter play two games behind closed doors and a third with its ultra curva empty.
"Closing stadiums and banning fan movements penalise real fans, who should be distinguished from the criminals, and it is the wrong response," said Salvini.
Serie A coaches were split on Napoli boss Carlo Ancelotti's call to stop games after racist chants.
Lazio coach Simone Inzaghi said he agreed with the idea.
"I agree with Ancelotti...stopping can be a solution to be tackled in the future," he said.
He said he also agreed with coaches' federation chief Renzo Ulivieri, who had proposed the same move.
Atalanta coach Gian Piero Gasperini said it would have been a "stupid" idea to stop the match.
"The idea of suspending matches and sending people home is an enormously stupid idea," he said.
"Some 60,000 people go to the San Siro: closing stadiums is a decision that perplexes me".
AC Milan manager Gennaro Gattuso said crowds should applaud to drown out monkey chants.
"If 50,000 people applaud above those four imbeciles, racist chants won't be heard," he said.
Gattuso added: "Koulibaly is a tank and the opposing fans are scared of him. Let's not hammer Italy, in other civilised countries I've seen banana skins thrown.
"We're all the same, black and white. We mustn't forget Heysel, Scirea or Superga".
Juventus coach Massimiliano Allegri said he was against stopping games and closing stadiums.
"I don't tolerate any form of racism or insults, also towards the dead and the tragedies that have happened," he said.
"But unfortunately in Italy we have lost a little of what ws our education and respect.
"Stopping games? Closing stadiums? It's not up to us to decide. I'm for going ahead, the problem needs to be sorted at source. Technology at grounds can go and get those stirring up trouble".
Inter coach Luciano Spalletti said "the time has come to say enough to hate in soccer" including racist chants.
Roma coach Eusebio Di Francesco also said he agreed with Ancelotti's call to halt play.
Premier Giuseppe Conte said in his end-of-year press conference that the fan's death was "unacceptable" and he was in favour of suspending Serie A "for a fruitful reflection".
He said, however, that he would "leave the decision up to the competent authorities".
Daniele Belardinelli, 39, a far-right ultra leader from Inter's twinned Serie D club Varese, was run over by an SUV while Inter fans armed with hammers, sickles and iron bars attacked Napoli vans and coaches.
Milan Prefect Renato Saccone said there would be a meeting of the city's security committee in January.
Salvini said he would meet both ultra and other fan groups in the New Year.
Police said they would question the three Inter fans arrested on Saturday.
They were named as Luca Da Ros, Francesco Baj and Simone Tira, all under 30.
Italian soccer's sporting judge ruled that Inter will play two games to an empty stadium plus a third with curva fans banned because of the chants. Koulibaly and Napoli's Italy striker Lorenzo Insigne both got a two-match ban from Italy's sporting judge on Thursday.
Koulibaly was banned for a red card issued after he applauded the ref for booking him while Insigne was banned for insulting the ref. Belardinelli, the dead Inter fan, had in the past received two five-year DASPO bans for hooliganism. Interior Minister Salvini said he would call a meeting of fans groups in Serie A and Serie B at the start of the year "so that soccer may return to being a moment of enjoyment and not violence.
"We'll see if we can do what others have not managed to do," said the leader of the far-right populist League party, who is an ardent fan of the other Milanese team, AC Milan.
Former premier Paolo Gentiloni slammed Salvini for "consorting with ultras", referring to the minister's recent meeting with an ultra leader he had never met before, who turned out to have a past conviction for drug pushing.
Saturday's Serie A game between Empoli and Inter will be restricted to fans living in Tuscany, a regional public order body decided Friday.