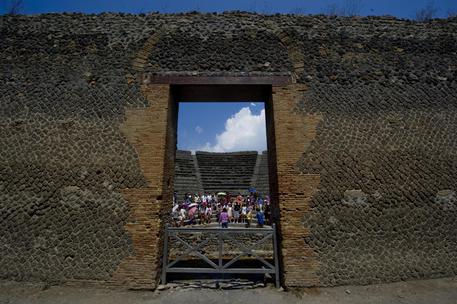 (ANSA) - Rome, December 20 - Pompeii may have had a theatre already at the time of the arrival of the Samnites in the fourth century BC, Superintendent Massimo Osanna said Thursday after the discovery of a concave area next to the second-century BC theatre that was preserved by the 79 AD eruption of Vesuvius.
The new digs at the famed archaeological site have "raised this hypothesis", he said.
There are archaeological remains in Pompeii for Greeks, Etruscans, Samnites, and an unnamed indigenous Italic population in addition to the Romans. The foundation of the city, and the exact phases of each cultural group, are a bit murky but are believed to date back to the sixth century BC.
It is however clear from the archaeological record in Pompeii and in other towns of southern Italy that sometime in the fourth century BC the people of Samnium moved down from the mountains and into some of the more urban areas. Just in Campania, there is evidence of Samnite populations in Capua and Nola in addition to Pompeii.
The tomb of a Samnite woman was found in Pompeii three years ago, while a recent dig uncovered a Samnite temple.
Archaeologists said the temple dated to the third century BC and was probably devoted to Mefitis, a Samnite version of Venus worshipped in volcanic areas and swamps. She was the personification of the poisonous vapours of the earth.
The Samnites, an Oscan-speaking people who once humiliated the Romans, were a tribe which controlled much of Italy south of Rome before the fourth century BC.
They fought three losing wars with Rome for the control of the region around Naples and later helped Rome's great Carthaginian enemy Hannibal before finally being crushed in 82 BC.
The discovery of the temple revolutionized archaeologists' concepts of the Samnites, showing them to be far more advanced than previously thought.
Samnites had largely been considered mountain warriors, whose settlements thrived due to a military pact with Rome.
But the temple dedicated to the swamp goddess showed that the Samnite culture was more sophisticated than realized.
The name Samnite comes by way of Greek and alludes to the point of a javelin. It suited the warlike tribesmen who fought a series of wars with the Romans and even defeated them soundly in the Battle of the Caudine Forks in 321 B.C., but who were eventually beaten back into their Apennine fastness, only to be absorbed by the Roman State.
A large amount of votive material was found at the temple site including lamps, terra cotta work, sea shells, coins and various kinds of bones.
Next to the temple archaeologists found the ruins of baths which may have been used for so-called "sacred prostitution," in which betrothed maiden were given a coin before losing their virginity in the temple prior to marriage.
Archaeologists said the find provided further evidence that Pompeii was a full-fledged city before it was taken over by the Romans.
Emmanuele Curti of London's Birkbeck College said the find was "of enormous interest" in a key area of the city between the Roman Forum and port.