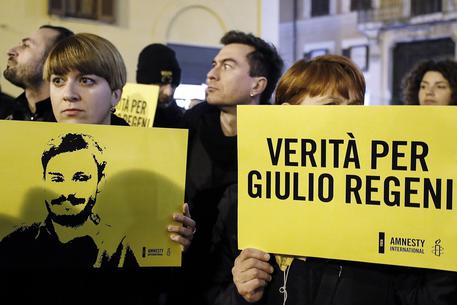 (ANSA) - Rome, December 4 - Rome prosecutors have put five Egyptian officials under investigation in relation to the death of Italian researcher Giulio Regeni in Egypt in 2016, sources said on Tuesday. The officials are members of a secret services department and of an investigative police unit in Cairo, the sources said.
They are probed for alleged involvement in kidnapping, according to the sources. They were named as General Sabir Tareq, colonels Usham Helmy and Ather Kamal, and major Magdi Sharif, as well as agent Mhamoud Najem.
Regeni, 28, disappeared in Cairo on January 25, 2016, the heavily policed fifth anniversary of the uprising that felled former strongman Hosni Mubarak, and his mutilated body was found in a ditch on the road to Alexandria on February 3. His parents said they could only recognise him "from the tip of his nose".
Regeni, from the northern Friuli region, was researching Egyptian street sellers' unions for Cambridge University, a politically sensitive issue. The head of the Cairo street sellers' union said he flagged up Regeni to the security services.
Deputy Premier and Interior Minister Matteo Salvini said Tuesday that Italy wanted the names of the people responsible. "We have been waiting for three years," Salvini said.
"I want to maintain good relations with Egypt and I'll do everything to have good economic, cultural, trade and social relations with a friendly country.
"But as an Italian, I expect the names and surnames of the culprits".